Five-time World Champion Van Barneveld looked set to crash out of the double-start tournament when he lost the opening set 3-0 to last year's runner-up, as Chisnall made a fine start.

Van Barneveld took out 129 and 105 to share the opening four legs of the second set, before a 13-darter from the Dutchman denied Chisnall a match dart as he forced a deciding set.

The two-time World Grand Prix runner-up then took out 109 and 75 to move 2-0 up in the third set, and though Chisnall hit double eight to reply it was Van Barneveld who hit the same bed in the next leg to complete a superb comeback.

"After the first set I thought I was dead and buried but I gave it all I had," said van Barneveld. "Maybe I had one or two lucky legs but I nicked it and I'll be back on Thursday night.

"Dave had a great first set and he's a fantastic player, but he let me in and I dug in and won. My finishing helped me, big-time, but I'll have to improve in the second round.

"I believe I'm playing well and I'm happy with this win. I'm trying to get back in the top 16 because I think I belong there, winning key tournaments."

Van Barneveld will now play Mervyn King in the second round on Thursday, with the 2012 World Grand Prix finalist going all the way to a deciding leg in his first round clash with Wes Newton before prevailing.

King edged the first set 3-2 before Newton levelled the game by taking the second 3-1, and though the Fleetwood ace led 2-1 in the decider, King squared the set on double four before winning the sudden-death leg on tops.

Richie Burnett was another winner in a sudden-death leg as he edged out Simon Whitlock in a remarkable contest.

After losing the opening set without reply, Whitlock hit back to win the second 3-1 and shared the first four legs of the third set - but could only watch on as Burnett took the deciding leg in dramatic fashion.

The Welshman initially missed seven opening doubles, before scoring 100, 100 and 180 to set up a 121 checkout, finishing the combination on the bullseye to claim victory with 11 scoring darts.

"In the last leg I was shaking - but the bull couldn't have been better placed if I'd gone up to the board and stuck it in!" said Burnett. "That's the pain you have to go through to win.”

Burnett's second round opponent will be two-time World Grand Prix finalist Terry Jenkins, who impressed with a straight sets win over Kim Huybrechts, for whom a 170 finish was not enough to prevent a third successive first round exit in Dublin.

2012 World Grand Prix champion Michael van Gerwen was a 2-0 winner over close friend Vincent van der Voort - who was the best man at his August wedding - as he began his bid to win a second World Grand Prix title by dropping only one leg.

"I wasn't happy with the draw and it was strange because nobody in darts has a relationship like me and Vincent, so it was really difficult," admitted world number one Van Gerwen.

"I'm really glad that I won the first set because Vincent started well and had his chances, and I'm happy with my performance - I played really well and I can build on this."

Dean Winstanley progressed to a second round meeting with the World Champion with a three-set victory over Michael Smith, who hit back from a set down to level only to see the Englishman prevail 3-1 in the decider.

"Two years ago I missed two darts to win and blew it against Dave Chisnall and I wanted to prove a point to myself tonight, so I'm ecstatic inside," conceded Winstanley.

"I dug deep in the third set and held my nerve.”

Stephen Bunting enjoyed a winning World Grand Prix debut as he defeated Ronnie Baxter in straight sets to set up a second round meeting with Peter Wright.

Wright, meanwhile, was a 2-1 winner against Jamie Caven in a see-saw game which saw the pair share the opening two sets with 3-0 scorelines before the World Championship finalist came from a leg down to take the decider 3-1.

The second round of the £400,000 event begins on Wednesday, with the four matches including reigning champion Phil Taylor's clash with Andrew Gilding. 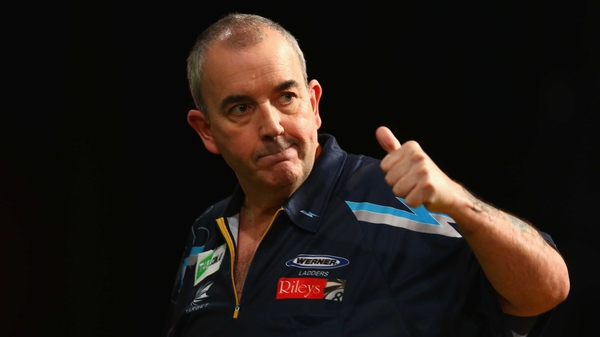