Phil Taylor says he knows exactly how Rory McIlroy felt after changing equipment as the darts supremo settles in with his new arrows.

World number seven golfer McIlroy had an unsettled 2013 after changing club manufacturer and as Taylor prepares to meet rival Raymond van Barneveld in Dublin tonight in the Premier League, the Stoke man says he’s in the same boat after also changing his supplier.

"I've swapped a lot of things, I've changed sponsorship, different manufacturer of my darts, it’s like driving a new car, you've got to get used to it," the 16-time world champion told RTÉ Sport.

"I’ve had to alter a few different things.

"It’s not all about having a new set of golf clubs or a new set of darts and getting out there and bashing the world. It takes time, it’s hard work but it’s also mentally straining. It’s not so much the equipment, it’s mental.”

"It’s a big game for me, this one. It’s like a Liverpool-Man United match."

Taylor, 53, currently sits sixth in the table and is looking forward to another meeting with his long-standing Dutch rival van Barneveld, who lies in third place, in a sold-out arena.

He said: "It's a big game for me, this one. It’s like a Liverpool-Man United match. I love it, playing Barney, and he loves playing me as well and the crowd also sense that. And being chock-a-block is an extra bonus for both of us really.

"Dublin is very special and I'm not just saying that because I’m here. It’s always a good reception every time we come. I’ve [been] up to the Jervis Centre, which is great, bought another pair of trainers and some trackie bottoms 'cos I’ve got glue on these ones ‘cos I was decorating."

Taylor also had his say on the other Premier League and admitted that he’d like to see the Reds claim the title.

“My heart wants Liverpool to win, just for something different but I still think Chelsea will still be difficult to catch,” he said.

Meanwhile, the other tie of the night at the O2 sees table topper Michael van Gerwen face second-placed Peter Wright. 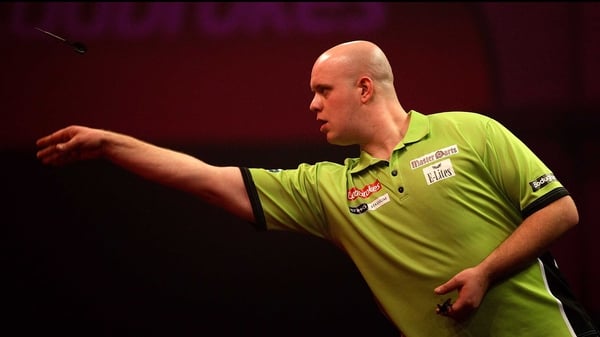