Phil Taylor produced some of the finest darts of his stellar career to clinch his 16th world title with victory over Michael van Gerwen in a high-quality PDC World Darts Championship final at Alexandra Palace.

'The Power' battled back from 2-0 and 4-2 down to prevail 7-4 against the hugely talented 23-year-old, who had triumphed in their two previous meetings but came unstuck tonight as his inexperience in world finals told.

Dutchman Van Gerwen threw a nine-dart finish on the way to beating James Wade 6-4 in his semi-final and time and again showed his class in a contest he entered as favourite for victory.

But the 52-year-old Taylor, who secured his passage to the final with a victory over Raymond van Barneveld, showed his class on the big points and won four of six sets that went to a deciding fifth leg, including two in a row to turn a 4-3 deficit into a 5-4 lead.

Van Gerwen kicked off the first leg with a 14-dart finish but Taylor responded in style, hitting a 180 before delighting Ally Pally with a maximum 170 checkout. 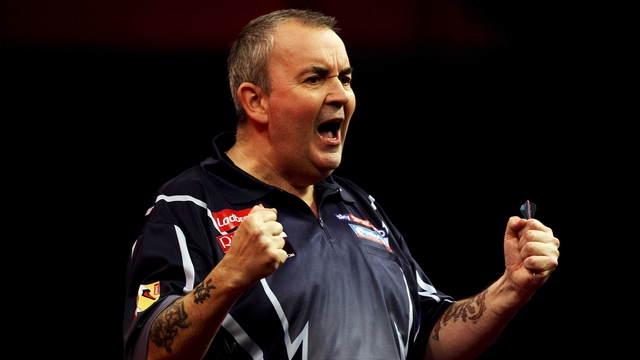 Van Gerwen was required to hold his nerve with a 140 checkout to seal the opening set, with Taylor down into double figures and applying the pressure.

The first break of the contest came in the third leg of the second set, Van Gerwen applying an 11-dart finish before holding for a two-sets-to-nil lead.

A third 180 of the match teed up another 11-darter at the start of the third leg as Van Gerwen began to turn the screw.

Van Gerwen missed a double 11 to go two legs clear in the third, allowing Taylor to level at 1-1, but a 123 checkout in the next had the Dutchman on the brink of a three-set lead.

But Taylor checked out a 120 and then took full advantage of a wobble by his opponent, who threw double-digits on successive visits to the oche to allow the 15-time champion to take the leg against the throw and with it his first set.

A 127 checkout against the throw at the start of the fourth set suggested Van Gerwen's jitters were behind him, but Taylor responded with a break back.

Van Gerwen missed a double top at 2-2 to throw away the chance of restoring his two-set lead, allowing Taylor to step up with his own 40 checkout to level the match.

Van Gerwen was a wire's width away from a 170 checkout at the start of the fifth, but got the job done on his next visit. Taylor moved ahead for the first time in the match with a break in the next, but Van Gerwen hit straight back with a 90 checkout for 2-2, the Dutchman then moving into a three-sets-to-two lead as Taylor lost his way.

Taylor was a millimetre away from a 148 checkout before Van Gerwen took the opening leg in the sixth. The Dutchman held in the next and only just missed another break in the third before getting the job done to take a 4-2 lead in sets.

The next set went to a fifth-leg decider as both players held twice. Van Gerwen had the advantage of throwing first, but Taylor chose the perfect moment to break as he closed back to within a set.

The pair exchanged breaks at the start of the eighth before Taylor again showed his class, holding in the third leg before breaking a second time as the match again moved all square.

The high-quality fare continued in the ninth as the score moved out to 2-2, and again Taylor used all his experience to make his move at the crucial moment, a 132 teeing up a double-tops finish for a break, which he duly completed after Van Gerwen had choked on a 107 checkout chance.

Van Gerwen looked shaky in the next set as Taylor raced to a 2-0 lead, the Englishman eventually prevailing 3-1 to take a 6-4 lead and move to within one set of his 16th world title.

The nerves of both men told at 1-1 in the next set as they took turns to spurn easy checkouts with three darts, but when Taylor landed a double nine to move into a 2-1 lead the writing was on the wall for Van Gerwen, and Taylor duly wrapped things up on a double 16 to clinch his first title since 2010, much to the delight of the raucous London crowd.