Ineos Grenadiers rider Richard Carapaz attacked to win stage 12 of the Vuelta a Espana, a 192.7km mountain ride from Salobrena to Penas Blancas on Thursday, while race leader Remco Evenepoel recovered from a crash to retain his red jersey.

Carapaz was out of the general classification battle at the start of the stage but the Olympic champion dropped his breakaway companions with his attack with just under 2km remaining.

The Ecuadorian went on to seal his first La Vuelta stage win, banging his handlebars in celebration as he crossed the line nine seconds ahead of Wilco Kelderman (Bora-Hansgrohe), while Marc Soler (UAE Team Emirates) finished third.

Earlier, Evenepoel slid out on a sweeping right-hand bend 50km from the summit finish at Penas Blancas but the QuickStep-AlphaVinyl rider controlled his rivals on the final ascent and sprinted to the line ahead of all the general classification contenders.

Before Thursday's stage, Bahrain Victorious rider Santiago Buitrago and Boy van Poppel of Intermarche-Wanty-Gobert were ruled out after testing positive for Covid-19.

QuickStep-AlphaVinyl were without world champion Julian Alaphilippe after he dislocated his right shoulder following a crash in stage 11 on Wednesday. No timescale has been set for his recovery. 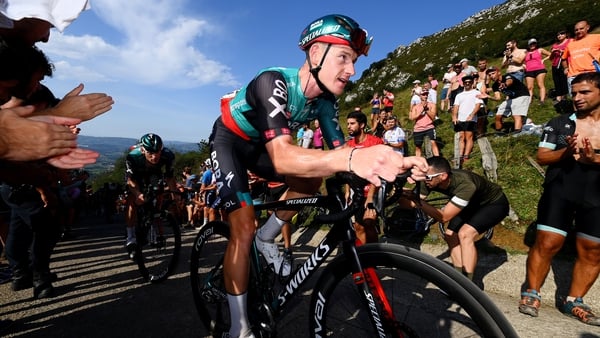