Sam Bennett stretched his lead in the points classification on Friday after Jesus Herrada of Cofidis sprinted to victory to take stage seven of the Vuelta a Espana, a 190km ride from Camargo to Cistierna.

It's the Spaniard's second individual stage win in the Spanish Grand Tour. Herrada pipped Samuele Battistella (Astana Qazaqstan) and Fred Wright (Bahrain Victorious) to the line, with Jimmy Janssens and Harry Sweeny also in the five-man breakaway group that finished together after keeping the peloton at bay.

Herrada timed his attack to perfection, taking the lead barely two seconds before crossing the line in a photo finish to become the second Spaniard after Marc Soler to win a stage at this year's race.

Bennett (Bora-Hansgrohe) was 29 seconds down on the breakaway but he led home the peloton in sixth place and is now 15 points clear of Mads Pedersen in the battle for the green jersey. 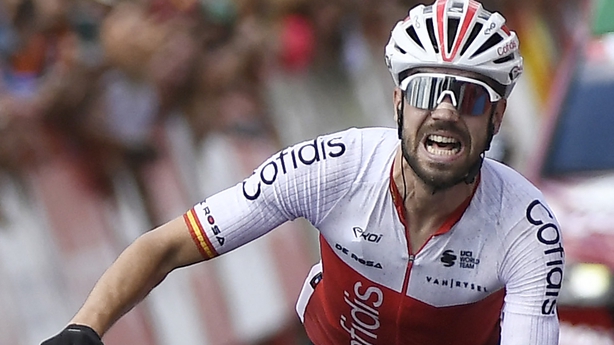 "It's crazy... I had to be patient in the last kilometre, following their wheels," Herrada (above) said.

"I knew that there were fast riders in the group but I was confident in my speed. We fought to the line and I was able to do it.

"We worked well together and we had to give it our all until the end. We knew that at the finish the wind could work in our favour. After Marc's victory, Spain takes a second stage win."

Remco Evenepoel of QuickStep-AlphaVinyl retained the leader's red jersey, with the Belgian maintaining a 21-second lead over Rudy Molard.

"Of course, it's a pity for the teams working in the bunch not to catch the breakaway, but there was a really strong group in the front," Evenepoel said.

"I have a nice advantage now, so I would also be happy if I could just keep this time gap over the rest. But if there's an opportunity, I will not let it go.

"It's a three-week race and arriving to the time trial with an advantage will be better than being behind."