Sam Bennett flashed home to claim a second successive stage win in the Vuelta a Espana on Sunday.

A day after outsprinting his rivals on the second stage in Utrecht, in-form Bennett triumphed on the 193.5km loop around Bedra.

The 31-year-old becomes the second Irish rider to win at least 10 stages in Grand Tours after Sean Kelly.

🇬🇧 Rewatch the last km as Sam Bennett makes it 2 sprint victories in a row in Breda!
#CarrefourConLaVuelta pic.twitter.com/RgbBahf8yE

Bennett heads the points race for sprinters on 117 points, with Pedersen occupying second spot on 80 points. Germany's Pascal Ackermann of UAE Team Emirates is third in the quest for the green jersey on 34 points.

Italy's Edoardo Affin will wear La Roja on stage four after becoming the overall leader, with his Jumbo-Visma colleagues Sam Oomen and Primoz Roglic next best in the general classification.

🔎❤️ Get up close and personal with the @borahansgrohe team as they celebrate another victory courtesy of Sam Bennett powerful finish in Breda.#LaVuelta22 pic.twitter.com/txJ6UbUmzK

Bennett's victory owed much to the work of team-mates Ryan Mullen and Danny van Poppel, with the Carrick-on-Suir star, paying tribute to his lead-out men:

"It was quite hard because a lot of people were fighting for our wheel," he said. "It was just the natural flow that people went up the side and squeezed me off, so there were a few tough moments to hold Danny's wheel. It was a hard fight.

"The boys again – what can I say? Jonas [Koch] was riding all day, a big thank you for that commitment. 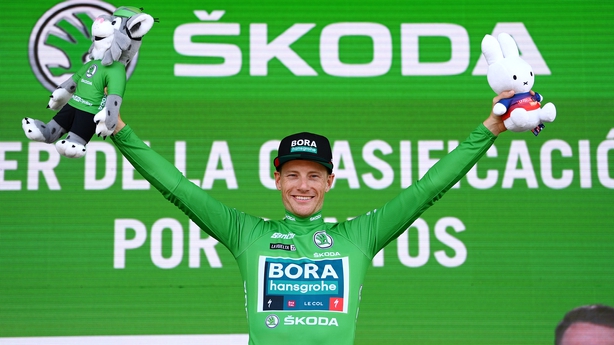 "Then the boys looking after me in the bunch all day. In the final, Jonas – even though he was riding all day – came back and gave a big turn.

"Then Ryan kept us up there, taking so much wind, then Danny. It was a masterclass."

Bar the tight finish, Sunday's stage was largely uneventful except for a crash for general classification favourite Richard Carapaz with around 18km to go. The Olympic road race champion was brought back to the peloton by his team mates

The peloton moves to Spain on Monday, where the next six stages will be raced in medium or high mountains of northern Spain, in the Basque Country and Asturias.