Wout Van Aert used a late attack to solo to victory on stage four of the Tour de France in Calais and extend his lead in the yellow jersey.

Van Aert, who had been second in all three opening stages of the Tour in Denmark, made his move on the final short climb of the 171.5km stage from Dunkerque and rode away on the descent to cover the final 10 kilometres alone.

The attack split the peloton to pieces and though the sprint teams managed to regroup they could not catch Van Aert, who had time to celebrate on the line as he won by eight seconds from the chasing pack.

Jasper Philipsen led home the much-reduced peloton and celebrated as though he thought he had won the stage, seemingly unaware that Van Aert had been a few hundred metres up the road.

Van Aert's attack on the Cote du Cap Blanc-Nez, the last of the six category four climbs on the first French stage of the race, seemed to catch unawares a number of the general classification contenders as small gaps appeared. 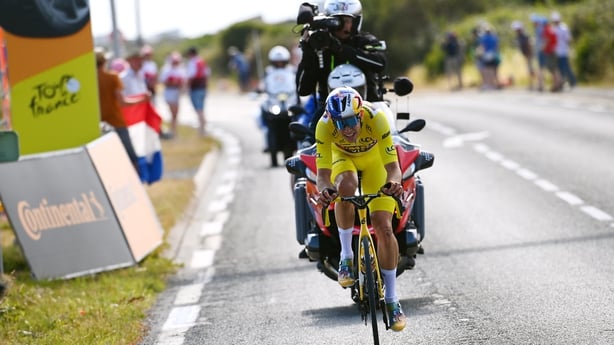 Only Van Aert’s team-mate Jonas Vingegaard and Ineos Grenadiers’ Adam Yates were able to stay close to the Belgian, with Geraint Thomas, Tadej Pogacar and Van Aert’s own team leader Primoz Roglic left behind – though they regrouped on the road into Calais.

Van Aert had lamented that "it wasn’t funny anymore" after being second in back-to-back sprints in Denmark, so he made sure there was no bunch finish here.

"I didn’t want to take the risk anymore," he said. "I think it was quite obvious we were trying something with the team and we were in the perfect position.

"I heard on the radio we had done some damage (on the climb). The goal was to go full to the top and see what happened.

"I came alone to the top. There was a bit of doubt whether to wait for Jonas and Yates but by going full I also put Jonas and the others in a good position, they didn’t have to ride, so I decided to go alone and the last 10 kilometres was all-out suffering."

Pogacar remains third, 32 seconds down, while Yates is eighth and 48 seconds back and Thomas 12th with a 50-second deficit.