Race leader Abi Smith shrugged off the frustration of two consecutive second place finishes so far at the Rás na mBan to take victory at the third time of asking at the summit finish on The Cut in County Laois on Friday.

The 19-year-old English rider led in stage one winner Kaia Schmid from Team Lux and her Team GB team-mate Anna Shackley at the end of 100km run in misty conditions in the Slieve Bloom Mountains.

Stage two winner Loes Adegeest of Jan Van Arckel was fourth with Alice Sharpe best of the Irish once more with fifth at the line in the same time as the winner.

Natalie Grinczer was sixth over the line as a lead group of 10 riders fractured in the final uphill charge to the finish line in the longest stage of the race. 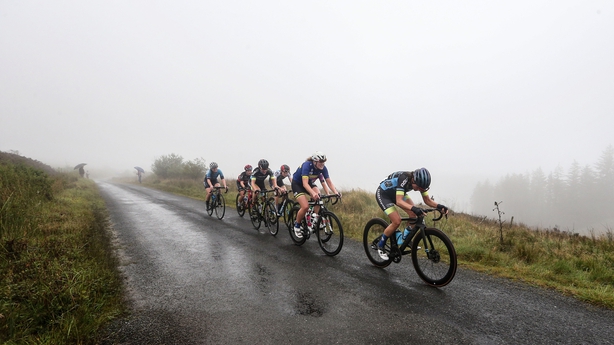 That result means Smith retains her leader's magenta jersey and stays level on time with Shackley, Adegeest and Sharpe ahead of the all-important stage four time trial on Saturday morning.

The final 20km included the twin assaults of The Wolftrap and The Cut mountains which proved decisive in forming the 10-rider group which contested the finish.

The first five riders were credited with the same time as the winner and, with no time bonuses on offer, it means the top four in the general classification remain deadlocked on time, only the accumulated countback of finishing positions making it possible to separate them.

Saturday's action begins with the stage four short hilly time trial at Tullaroan at 10am. After a lunchbreak and some rest, the riders will go back racing at 6.30pm in the city centre circuit which begins at 6.30pm.