Tim Merlier won a dramatic stage three of the Tour de France as a string of crashes caused chaos in the final 10 kilometres.

Geraint Thomas and Primoz Roglic both suffered painful tumbles and lost time, defending champion Tadej Pogacar was held up by an incident inside the last four kilometres, while both Mark Cavendish and Caleb Ewan were denied the opportunity to contest the stage.

Ewan crashed within sight of the line, bringing down former world champion Peter Sagan in the process, as Merlier celebrated his first Tour stage victory up ahead after getting a lead-out from Mathieu van der Poel in the yellow jersey.

Cavendish had been held up behind a nasty incident on a bend around four kilometres from the finish of the 183km stage from Lorient to Pontivy.

That came after Roglic had hit the deck painfully around 10km from the line, with his Jumbo-Visma team-mates unable to get him back up to the pack despite a frantic chase.

Amid the chaos, Van der Poel, Julian Alaphilippe and Richard Carapaz were the notable general classification riders to make it over the line in the front group, but there were time losses throughout the field with all but Ewan's crash coming outside the final three kilometres.

Pogacar and Thomas were part of a group that came over the line 26 seconds down. 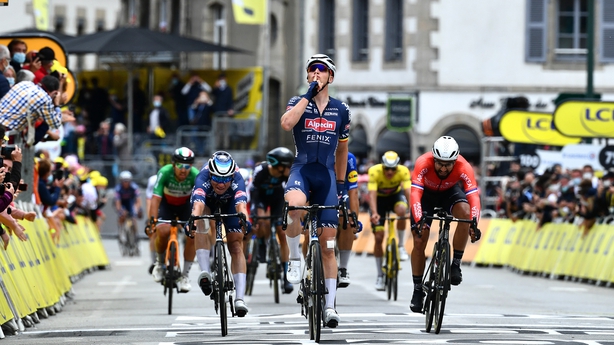 Dan Martin rolled home in 121st position on the stage, 2mins 11secs behind the winner. Martin is 70th overall, 8mins 30secs off the race leader.

Merlier had been oblivious to Ewan's crash behind as Alpecin-Fenix celebrated a second straight stage win on their Tour debut – with his team-mate Jasper Philipsen in second.

"I’m living a dream I think," the Belgian said. "After the Giro I was already really happy and now I win a stage on the Tour, the biggest race in the world. I can’t believe it.

"(Van der Poel) said he was going to do the lead out and I said, 'You are crazy’ but he loves to do it. Jasper took over with 700m to go so I only needed to pull for the last 150m.

"When I look around me I can’t believe there is nobody on the wheel, but you say there is a crash so that will be the reason." 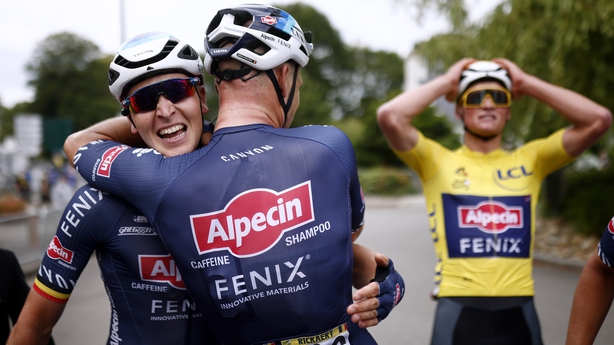 Earlier, Geraint Thomas was caught in a heavy crash early in the stage as the Welshman appeared to slip in damp conditions, and was then struck from behind by Jumbo-Visma's Tony Martin.

Thomas was checked by race doctors before remounting but was more than three minutes down on the peloton and looked uncomfortable as he tried to pace his way back to the group. He ended the stage just 26 seconds off the leading group.