Primoz Roglic [Jumbo-Visma] strengthened his overall lead in the Paris-Nice race by powering to victory on the seventh stage on Saturday, a 119.2km ride from Le Broc.

The Vuelta a Espana champion took his third stage win in this year's edition with a late acceleration on the final climb to La Colmiane [16.3km at 6.3%] to beat Swiss Gino Mader by two seconds.

Slovenian Roglic now holds a 52-second lead over Schachmann, with Russia's Aleksandr Vlasov in third place, 1:11 off the pace.

Ireland's Sam Bennett [Deceuninck-QuickStep] produced another stirring ride, leading the break with real purpose as he looked to aid his team-mate Mattia Cataneo on the climbs.

He eventually finished 23:33 down on the stage winner and is second in the points classification, 18 points behind Roglic.

Sunday's eighth and final stage is a 93km ride from Le-plan-du-Var to Levens, after the initial course, a ride around Nice, was changed amid a weekend lockdown in some Cote d'Azur cities because of Covid-19. 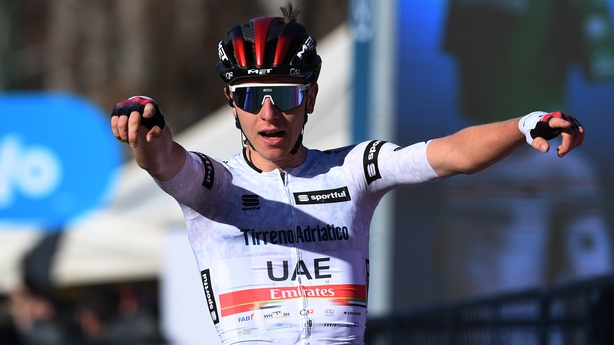 The Slovenian attacked in the final climb, six kilometres from the finish to beat Briton Simon Yates by six seconds and Colombian Sergio Higuita by 29.

Belgian Wout van Aert, who started the day as the overall leader, fought hard on the climb but showed his limitations in the mountains to finish ninth, 45 seconds off the pace.

"Today was a very hard stage. My team did a great job bringing down the gap from the breakaway and then I did my best on the climb: I am very satisfied with this win," said Pogacar.

Irish Trek-Segafredo rider Ryan Mullen finished safely in a pack 22:53 down on Pogacar.