Dan Martin is not interested in setting himself specific targets as he aims to maximise the remaining years of his career.

The Irishman recorded his career-best Grand Tour result at the age of 34 last year when he finished fourth in the season-ending Vuelta a Espana.

It is a result which has given Martin huge confidence, but you will not find the Israel Start-Up Nation rider mapping out a detailed list of what he wants to achieve in 2021.

"My goal is just to enjoy racing my bike," he said. "I know I don't have many years left now and I just want to embrace being a pro cyclist.

"There are no small races on the calendar any more. We race every race equally. I'm not going to set lofty goals or ambitions. If you win a stage of [the Tour of] Valencia it feels as good as any other race."

Martin said the sport was more intense now than he has ever known it since joining in the professional ranks in 2008, but that has not dimmed his enthusiasm.

"Last week I barely left the house if I wasn't in lycra, whereas five or six years ago you could live a relatively normal life and still compete," he said.

"Now it's a full-time commitment and that's mentally hard, especially when you have a young family, because they're making sacrifices too.

"But right now, as I sit here, I feel good, relaxed, confident. I don't know how many years I have got in me but my coaches still feel I've got room to progress."

"It's a nice feeling to go to a bike race and do your best."

The Vuelta result offered proof of that, even if it came in such a strange year when lockdown upended the racing calendar.

But while it showed he can still mix it with the best, the three-week race also taught Martin about himself.

"It was a turning point because I realised that if I got on the podium, it doesn't change my life," he said.

"It would be amazing but any results I get now, it doesn't change anything for me, it's just about enjoying that moment.

"What made the Vuelta so satisfying for me is I stayed concentrated and focused for three weeks. I didn't make any mistakes, I didn't have any excuses, and I was the fourth best rider.

"It's a nice feeling to go to a bike race and do your best."

Martin does not yet know what his 2021 race program will look like, but expects to be at the Tour before a possible return to the Vuelta. 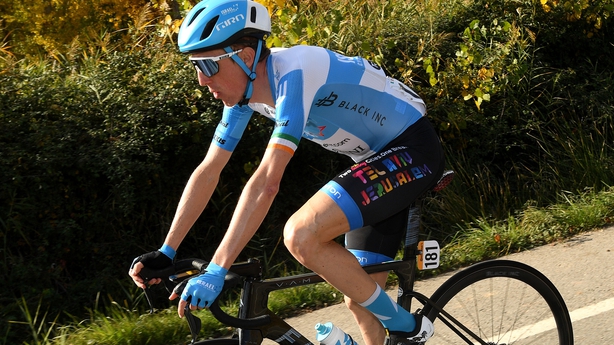 Life at Israel Start-Up Nation will change considerably this year with the arrival of Chris Froome.

Martin did much to help convince the four-time Tour winner to make the move from the Ineos Grenadiers, even though it will probably relegate him to a support role this July.

Martin himself signed for the Israeli team at the end of 2019, before they had gained their WorldTour license, but said Froome was joining an outfit that had progressed hugely in a short space of time.

"It amuses me to think back to the reaction I got when I signed here," he said. "Obviously I didn't expect Chris to be coming but I knew the ambitions and believed in the project being built here and that's why I came.

"It's satisfying to have been part of building this. Last year was tough but the team developed incredibly quickly.

"It's a great environment to be in. As a rider you feel valued and respected even if the results are not always there.

"Everybody understands you go out there and do your best, and then the results follow."