Belgian Jasper Philipsen won stage 15 at the Vuelta a Espana on Thursday after a gruelling 230km hilly route from Mos to Puebla de Sanabria lasting over six hours in persistent rain and a constant headwind.

Overall leader Primoz Roglic of Slovenia retained his 39-second lead over Ecuador's Richard Carapaz as both riders crossed the line along with Philipsen in an 84-man peloton that included Ireland's Dan Martin, meaning no change to the general classification standings.

Martin, of the Israel Start-Up Nation team, remains a minute and 42 seconds down on Roglic, with a 55 second gap to Hugh John Carthy in third.

Sam Bennett endured a difficult day in the saddle, falling off the back of the peloton and was unable to recover in challenging weather conditions. Bennett, who claimed the fourth stage, finished in the final group, more than 18 minutes down on Philipsen.

Italian rider Mattia Cattaneo launched a solo attack from the breakaway group with 30km remaining and at one point had a 90-second lead but was reeled in during the final phase of the stage.

UAE Team Emirates' Philipsen, meanwhile, waited before attacking German Pascal Ackermann in the uphill finish and kept in front before crossing the line for his first Grand Tour win, joyfully punching the air before embracing his team mates.

"It's amazing. I can't describe how happy I am with this victory. It means a lot to me. I've been waiting all the Vuelta for the right moment and today this moment was unexpected,' he said.

Roglic was just glad the punishing stage was over after tackling unforgiving conditions, made worse by the Vuelta being moved from its traditional place in the calendar from the end of the Spanish summer to winter due to coronavirus disruption.

"It was a hard day," he said. "I'm really happy that now it is behind us. I don't know how enjoyable it was. It was a hard pace... fast all day long and the cold and rain. A big and tough day is behind us," .

Friday's stage from Salamanca to Ciudad Rodrigo is the last of three consecutive hilly routes but is far shorter than Thursday's stage at 162km.

The race is set to be decided in Saturday's mountain stage before the procession into Madrid on Sunday. 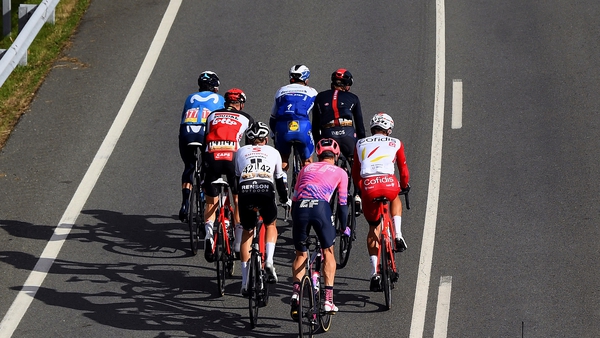