Strong winds and hard racing made for an exciting and intense Senior Women's National Championship as Lara Gillespie sprinted to victory.

The UCD Cycling Club rider came first in a masse sprint victory which filled the finish straight at Knockaderry on the last day of the Newcastlewest CC promoted event.

The day began in cold but sunny conditions, as the thirty strong field raced downhill to the first turn. Very quickly a break formed with McCrystal attacking in a small group.

But as the 20-kilometre lap continued the breeze turned from light to gale nullifying multiple escapes from gaining traction.

There were multiple attempts to break free but on the heavy terrain they were constantly brought back to the peloton.

There was little chance that the strong women's field would settle and as they closed in on the finish, after 80 kilometres of racing, they were more attempts to break the standoff. But the last kilometre saw tense tactics come into play as high pace saw riders begin to mark each other for the sprint.

Gillespie kicked hard on the uphill sprint and took the victory a bike length ahead of McCrystal.

Lara Gillespie, speaking just minutes after her victory, paid tribute to the strength of the other riders.

She said: "It was intense from the beginning of the race, there was a group off the front. We were coming up the hill and with about 500 metres to go it just felt like it was going on for ages, it was a really good race.

"So many strong women out today, I am just really surprised that I won. I am so proud, I worked so hard all year. I was so disappointed after the TT - I was really motivated.

"The last kilometre was very tactical. Everyone was watching each other, I thought I was in a rubbish position and there were nearly a few crashes, I just got a gap on the outside and I went for it. It felt way longer than I thought but luckily it went well."

Eve McCrystal gave her read of the race: "I attacked on the first lap, it was very difficult from the start, to get away.

"From beginning the wind wasn’t as bad, but as the day progressed it got stronger and a few attacks went up the road and stuck for a while. But nothing was sticking long enough, I think the long open road and the fact that when they went away we always had them in sight also contributed.

"By the last lap we just knew it would come down to a sprint to the line, I am delighted for Lara, she had an amazing kick on her and I just did my best to hold on and get second.

"I’m delighted I got podium but I was just so close to winning. I’m happy, I had a great weekend, I can’t complain and I am delighted for Lara, she deserves it and she’ll wear the jersey well."

In the Junior event, ten women took to the line, and it was joy unbridled for Ennis rider Ella Doherty who screamed with surprised delight as she took the victory in a sprint.

She said: "We were coming up the hill at the end and we were together. I am not a sprinter but I just put the head down, I just told myself "I can do this".

"I’m so, so delighted, thanks to my coaches, they were just so supportive for the whole year. I really can’t believe it." 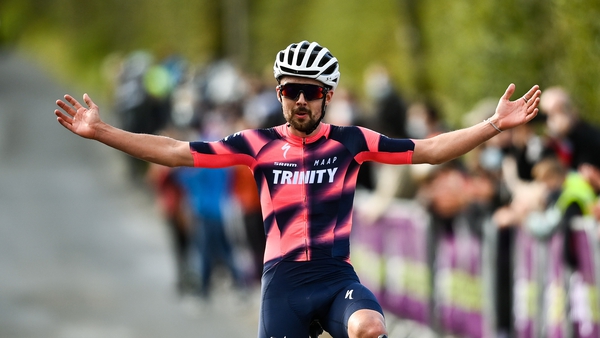