Slovenia's Tadej Pogacar pulled off a major upset at the Tour de France with a monumental victory in the final individual time trial, while Sam Bennett is virtually assured of taking the green jersey in tomorrow's final stage.

Sunday's outright stage winner will receive 50 points, with 20 on offer for the intermediate sprint.

With Bennett holding a 55-point lead over Peter Sagan, he is all but assured of the win and thus become the first Irishman since Sean Kelly in 1989 to claim the maillot vert.

Bennett finished 10 minutes behind the stage winner, but safely within the 25% cut-off ahead of the final day, a 122km spin with eight laps of the Champs-Elysées, normally a processional stage until the sprint finish.

"I think when I arrive into the Champs-Elysees and that first lap it's going to be another thing that's going to be amazing, I'll probably have a tear in my eye," Bennett said.

"It's something you always dream about. I'm looking forward to the occasion and doing the best race we can possibly do and seeing if we can take home another stage."

The real drama came in the hunt for yellow where Pogacar won the 36.2km solo effort against the clock as compatriot Promiz Roglic, who had started the day with a 57-second lead in the general classification, cracked in the uphill section, a 5.9km climb at an average gradient of 8.5%.

"I don't know what to say, it's a dream," said Pogacar, who now leads second-placed Roglic by 59 seconds ahead of Sunday’s final stage, a largely processional ride to the Champs Elysees in Paris where only the final sprint is contested.

"Getting the yellow jersey on the final day, we were dreaming of it since the start. I knew every corner on the road, thanks to the work of my team. 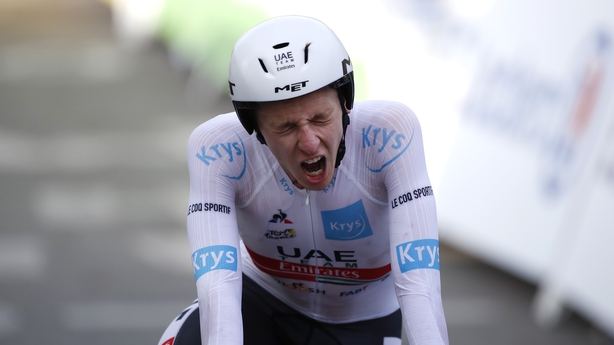 "I think that my head is going to explode."

Pogacar, who is set to become the youngest winner of the Tour since Henri Cornet in 1904, clocked 55 minutes 55 seconds - the perfection of the numbers matching his performance.

Roglic only took fifth place, 1:56 off the pace after what appeared to be a cautious start turned into a major meltdown.

The 30-year-old, who had controlled the whole race with his dominant Jumbo-Visma team, imploded on the climb and crossed the line with a livid face before sitting down on the road.

A raw talent who holds no fear, Pogacar, who celebrates his 22nd birthday on Monday, now holds three distinctive jerseys - the yellow, the white jersey for the best Under-25 rider and the polka dot jersey for the mountains classification.

The upset echoes that of the last day of the 1989 Tour de France when American Greg LeMond won the race by eight seconds over France's Laurent Fignon after starting the time-trial 50 seconds off the pace.

There was another major change on Saturday as Australian Richie Porte leapfrogged Colombian Miguel Angel Lopez into third place overall by finishing the 20th stage in third spot.

After losing all hope of overall victory following a crash in the opening stage, Frenchman Thibaut Pinot rode through impressive crowds and smoke in his hometown of Melisey, where the roads had his name and that of his goat Kim painted all over them, adding to the sense of surrealism on the day. 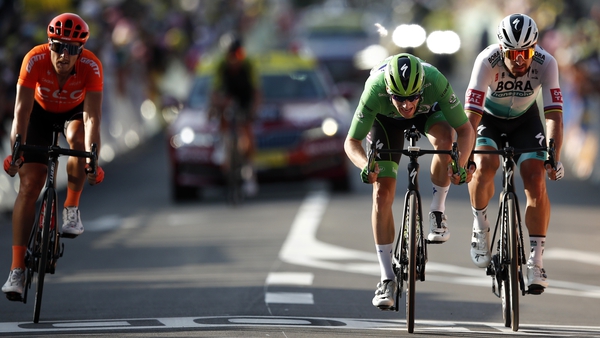