Dutch rider Fabio Jakobsen is in a stable condition but remains in a medically-induced coma in hospital after a major crash on stage one of the Tour of Poland.

Jakobsen's team Deceuninck-QuickStep confirmed the 23-year-old had not suffered brain or spinal injuries after he collided at high speed with compatriot Dylan Groenewegen in the final downhill sprint and crashed over the barriers into an official.

Jakobsen was air-lifted to hospital.

A Deceuninck-QuickStep statement said: "Fabio Jakobsen's situation is serious but at the moment he is stable. Diagnostic test didn’t reveal brain or spinal injury, but because of the gravity of his multiple injuries he is still kept in a comatose condition and has to remain closely monitored in the following days at the Wojewodzki Szpital in Katowice.

"Further information will be made available in the course of the coming hours. Meanwhile, we would like to thank you for your heartwarming support."

Race doctor Barbara Jerschina earlier told reporters: "His condition is very severe. There is a danger to his life.

"Unfortunately, it is quite a serious injury to the head and brain. He has lost a lot of blood. He is very strong. I hope he will survive." 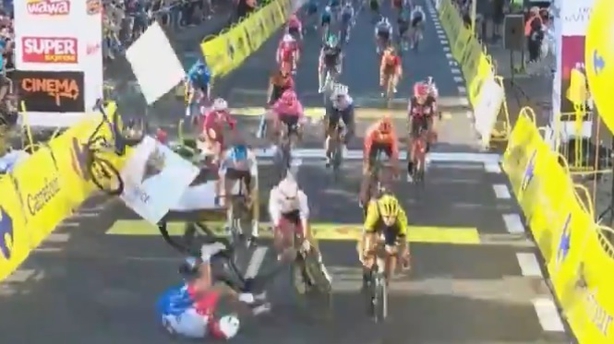 Jumbo-Visma sprinter Groenewegen drifted into Jakobsen’s path and, after he had been disqualified, the 27-year-old’s action was condemned by cycling’s governing body.

A UCI statement read: "The Union Cycliste Internationale strongly condemns the dangerous behaviour of rider Dylan Groenewegen (Jumbo-Wisma), who sent Fabio Jakobsen (Deceuninck-Quickstep) into the barriers a few metres from the finish, causing a collective crash at the end of the first stage of the Tour of Poland.

"The UCI, which considers the behaviour unacceptable, immediately referred the matter to the Disciplinary Commission to request the imposition of sanctions commensurate with the seriousness of the facts."