September 7, 1972 is a date etched in Irish cycling history.

That was the day when seven Irish riders with no race numbers gatecrashed the Olympic cycling road race in Munich.

One even took the lead.

This was the earthquake moment when a major split in the sport here came to the surface on sport's biggest stage.

It caused a political storm and changed the course of Irish cycling forever. It's also the subject of this week’s Documentary on One - Green and Gold - which will be broadcast on RTÉ Radio 1 this Saturday (alternatively listen to podcast here).

The Munich Games are remembered for the magic of Mark Spitz and Mary Peters, and for the sadness of the Black September siege, when 11 members of the Israeli team were killed.

Amazingly, the Games continued after just one day of mourning.

The Olympic cycling road race was one of the first events to take place after the restart, going ahead amid heightened security.

And, with it, an audacious protest by a group of Irish cyclists. 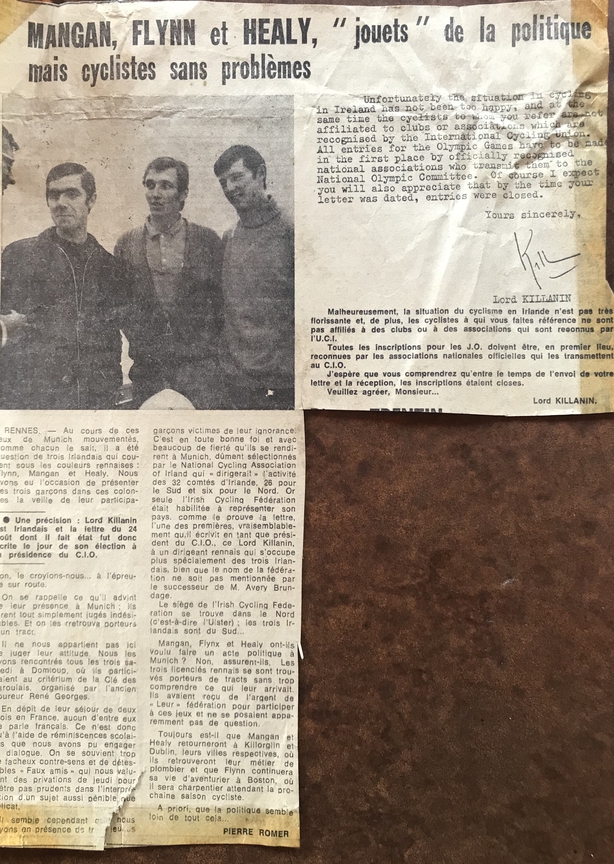 "It never dawned on us that we could be shot or mistaken for terrorists or whatever," says former cyclist Pat Healy, who took part in the protest in Munich.

It was an emotive time with the Troubles raging in the North and the roots of this story are mired in the complicated history of partition.

By 1972 there were two internationally recognised Irish cycling organisations on the island - one in the South and one in the North. But there was also a third organisation.

Known as the NCA or National Cycling Association, they were led by a group of prominent republicans and represented the entire island of Ireland, all 32 counties.

For decades, NCA riders like Healy had been barred from international competition. There were protests at the 1955 World Championships and 1956 Olympic Games, and by 1972 they were prepared to take drastic action to highlight their cause.

Kerry rider John Mangan was another member of the NCA and is the cyclist who took the lead in the Olympic road race - even though he wasn’t entered in the race.

"As I always said, I wouldn’t sell my soul for 30 pieces of silver by changing over to an association that I didn’t believe in. I believe in 32 county and that’s it," says Mangan.

The NCA plan was to drive a secret team of riders across Europe in time for the Munich Games and have them covertly take part in the race.

On the day of the race, four riders were sent to the start line. Three more were waiting in some woods up the road, ready to enter the peloton as it passed.

Meanwhile, the official Irish Olympic team of Kieron McQuaid, Liam Horner, Peter Doyle and Noel Teggart were unaware of what was about to unfold.

Healy was one of the rogue NCA riders at the start line and he was desperately trying to blend in with the official competitors.

"I rode the bike right up to where they were lining up, right as the clock was coming down to zero hour," says Healy.

"I immediately turned the bike into the front, so I got started at the front of the group. If I was going to do something, it was the perfect time, I got the perfect start to the race."

Up the road, three more NCA cyclists, including John Mangan, were in the woods waiting to join in.

McQuaid was safely in the bunch with the rest of the official Irish Olympic team when he noticed something unusual a few miles into the first lap.

"I remember on the hill, one lap, I saw what looked like three bike riders getting out of a hedge and jumping into the race," says McQuaid.

"The first thing I thought was they must be local bike riders, just, don’t even think about it, don’t worry about it, somebody else will sort it out.

"A mile or two up the road, I ended up being behind one of them and I noticed he was wearing a white jersey with a green and gold band.

"I thought ‘Oh my God, we’ve got three NCA riders in the bunch'.

In the resulting chaos, Teggart was forced out of the race and Mangan was arrested. It was a desperate low for Irish cycling, but also a turning point.

The incident in Munich was the beginning of the end of the split that had lasted for decades, just in time for a golden era that would see the likes of Sean Kelly, Stephen Roche, Martin Earley and Paul Kimmage reach the top of the sport in the 1980s.

And to this day, Mangan believes what happened in Munich was the catalyst for change. Others are not so sure.

One thing that is for certain is that Irish cycling has come a long way since the dark days of 1972 and a fractured sport.

Now, nearly 50 years on, there is a new generation of Irish cyclists riding high in the sport, all competing under an all-island banner, and all wearing green and chasing gold.

Listen to the Green and Gold on RTÉ Radio 1 this Saturday from 1-2pm.