Italian cyclist Umberto Marengo should be training for the Giro d'Italia, but instead is making deliveries during the coronavirus pandemic.

The Giro will not be starting on 9 May because of the virus that has officially killed almost 26,000 across the Mediterranean country.

Instead he has decided to pull on his lycra and start hauling pasta and pizza across the suburbs of the northern Italian city of Turin.

The 27-year-old had little to do but sit at home with his girlfriend given the enforced lockdown.

The subject of ice cream came up and Marengo's new career soon followed.

"We searched the internet and found this ice cream parlour making home deliveries," Marengo recalls. "So I began to wonder if I couldn't find some people who needed someone to make their deliveries for them."

Marengo got in touch with the mayor and was soon speeding along abandoned city streets on his racing bike with a rucksack full of deli sandwiches strapped to his back. 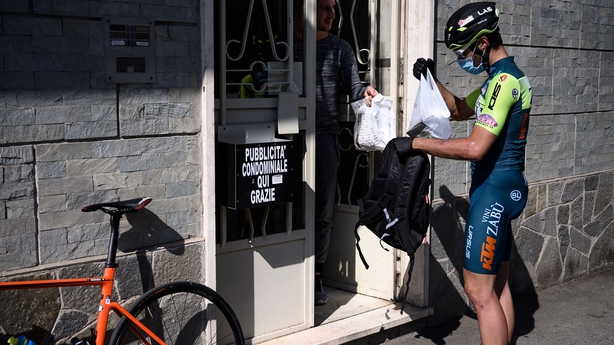 "The customers are all amazed," Marengo admits.

"Especially since I always try to go up by the stairs to stay that little bit fitter."

The pandemic has played as much havoc with the global sports schedule as it has with most other aspects of life.

The Giro has still not been rescheduled and the timeframe for the two other major cycling races -- the Tour de France and the Vuelta a Espana -- is unknown.

But Italy is preparing to ease its way out of what is now the world's longest active national lockdown when the current restrictions expire on 3 May.

Marengo and the other riders will soon drop what they are doing and enter extreme training regimes.

The KLM rider says delivering food has been rewarding -- although maybe not terribly useful for staying racer-fit.

"This is mainly to stay useful to my community," he says. 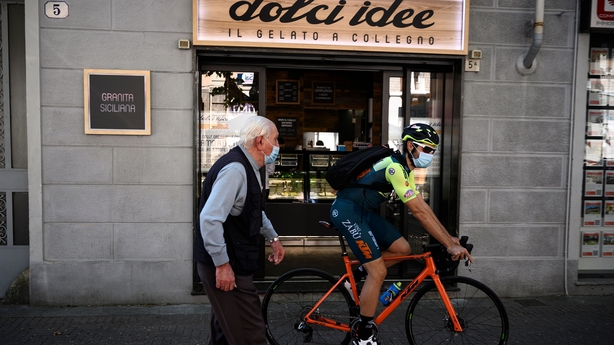 He makes up to 30 deliveries a day and has managed to set a personal lockdown record by riding 70 kilometres (45 miles) in a day -- less than half the average length of a single stage.

Marengo conceded that he will probably have a lot of ground to make up when he makes his last delivery once Italians' stay-at-home orders are lifted.

"This really has nothing to do with normal training, even if I try to make every delivery as quickly as possible," Marengo says.

It allows me to clear my head

But at least he has managed to avoid being pushed through punishing routines at the gym by his trainer.

"I never liked it," Marengo says of the tedious hours at the gym.

"That's another reason I started making deliveries. It allows me to clear my head."