Irish cyclist Sam Bennett came close to a second stage victory on the Tour Down Under but was pipped at the line by Caleb Ewan after a distance miscalculation.

The 29-year-old marked his Deceuninck-Quick-Step debut to take the first stage on Tuesday and looked well placed to claim victory on stage four today before the Australian overtook Bennett just before the finish line into Murray Bridge.

Speaking afterwards, Bennett said that the guide book had miscalculated the finish and he believed there was 300 metres to go when he rounded the final bend when in fact the remaining distance was only half that length.

He believed the oversight cost him the stage victory.

"It said it was 300 metres to go from the final corner. But when we came out of it we already saw the 150 metres sign," he said.

"I think if it was the way it said in the book; I think we would have got it," he said, explaining he was about to wind up before quickly realising he should kick for the line.

In the points classification, the Irishman is in fourth place on 29 points behind Daryl Impey, Ewan and Belgian Jasper Philipsen. 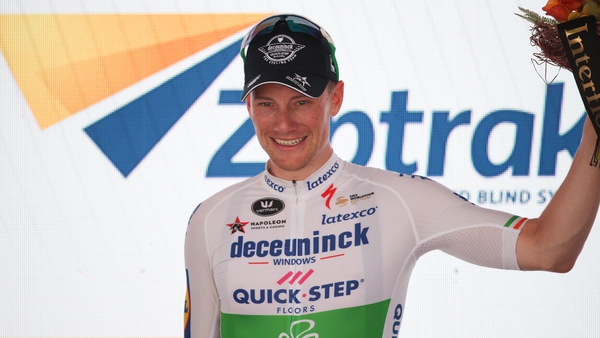 Sam Bennett wins opening stage of Tour Down Under Cycling