The 23-year-old Dane was a surprise winner, continuing cycling's new youth movement as he beat Matteo Trentin and Stefan Kung when the men's elite road race, 261 kilometres of arduous toil in the cold and wet Yorkshire Dales, came down to a three-way sprint on Parliament Street.

Trentin was the first to open up after they came past Betty's Tea Rooms but the Italian had gone too soon as Pedersen swept past him to take the rainbow jersey by a comfortable margin.

Pedersen won the Tour of Denmark in 2017 and was second in the Tour of Flanders the year after, but this was comfortably the biggest result of his young career.

"I think it changes a lot for every guy who is world champion and it will change a lot for me," he said.

"I'm finished with playing the underdog. I think that's going to be pretty much impossible from now on."

With around 35km remaining, pre-race favourite Mathieu Van Der Poel and Trentin bridged over to Kung, Pedersen and Gianni Moscon, who had gone clear one lap earlier.

The five-man group had a lead of 47 seconds as they began the final lap, but Van Der Poel soon cracked.

That was the moment Pedersen's mindset changed as he correctly predicted Moscon, having done so much work, would go next.

"I would have just been happy with a medal, but when there are only three guys left you have everything to win and nothing to lose," he said.

"So I took a chance and it was enough to get the jersey." 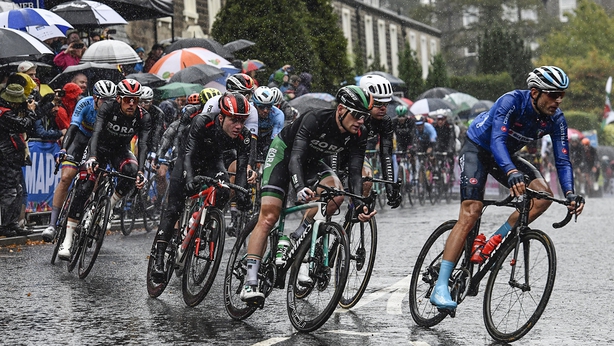 Whichever rider emerged from this day with his arms in the air would be a worthy winner. These World Championships have seen bad weather all week but the worst was saved until last.

Organisers announced early on Sunday that the route would be cut by 19 kilometres to 261km, bypassing the key climbs of Buttertubs and Grinton Moor as flooding struck roads made famous by the 2014 Grand Depart of the Tour de France.

Cutting out the two climbs did little to alleviate the difficulty of the day, reducing the amount of climbing from 3,808 metres to a mere 3,394m.

And with heavy rain falling, coupled with strong winds, this was a true survival of the strongest.

The peloton ploughed through deep standing water after the summit of the Cray climb in a stark illustration of the conditions.

It led to a heavy rate of attrition as each of the nine laps of the finishing circuit in Harrogate saw more riders climb off, with only 46 of the 197 starters making it to the end.

Defending champion Alejandro Valverde climbed off with 100km to go, with 2018 Tour de France winner Geraint Thomas another to give up early. Team Ireland lost both Dan Martin and Sam Bennett before the end.