Ireland's Nicolas Roche held on for sixth in a scorching ninth stage of the Tour de France, on a day the breakaway prospered.

Daryl Impey won the stage, the South African beating Tiesj Benoot in a two-man sprint for the line after the pair had left their fellow escapees behind on the final climb of the 170.5km stage from Saint Etienne to Brioude.

It was Impey's first solo success in the Tour, though he was part of Orica-GreenEdge's team time trial success in Nice in 2013 and a few days later became the first African to wear the yellow jersey in Montpellier.

This was always pegged as a stage for a breakaway, and a powerful 15-man group including Team Sunweb's Roche, EF Education First's Simon Clarke and Bora-Hansgrohe's Lukas Postlberger was quick to form as the peloton left Saint-Etienne, building a lead of more than 10 minutes.

The first gaps in the break appeared when Postlberger attacked 40km from home, with the Austrian pulling almost a minute clear before counter-attacks began to shed riders.

Roche was part of a seven-man group that reeled in Postlberger on the Cote de Saint-Just, and the Irishman then launched another attack that only Lotto-Soudal's Benoot and Adam Yates' Mitchelton-Scott team-mate Impey could follow before they left Roche behind on the final approach to Brioude.

"They were killing me on the flats," Roche said afterwards. "There were a lot of big engines today. Even though we had some margin, the pace was high all day long.

"With about 25km to go there were the first attacks and the group got smaller, it was there the pace was really intense. I tried to make the most of the climb but Benoot was really strong and then Daryl Impey came from nowhere into the last kilometre.

"When I saw him, I thought, 'Oh wow, now it's going to be complicated' because I know how good of a bike rider he is on this terrain." 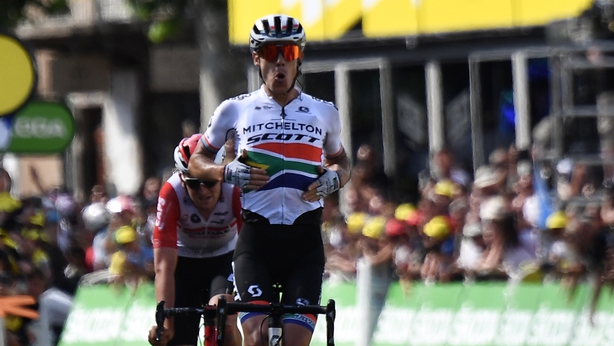 The peloton followed more than 15 minutes later, having enjoyed a relatively serene afternoon with the general classification contenders unthreatened and the sprint teams keeping their powder dry for Monday's stage 10 to Albi.

AG2R La Mondiale's Romain Bardet, born and raised in Brioude and still lives just up the road, put in an attack on the final climb but was comfortably closed down by Geraint Thomas' Team Ineos and they rolled into town together.