Thomas De Gendt soloed to victory on stage eight of the Tour de France in Saint Etienne as Julian Alaphilippe regained the yellow jersey and Geraint Thomas survived a dramatic crash which snapped team-mate Gianni Moscon's bike in half.

Lotto-Soudal's Thomas De Gendt was the last survivor of a four-man breakaway on the 230km stage from Macon, and had the power to hold off a late attack from Deceuninck-Quick Step's Alaphilippe and Thibaut Pinot of Groupama-FDJ.

Late in the stage the Team Ineos train was derailed in frightening fashion on a downhill bend as EF Education First's Michael Woods fell in front of them.

Moscon's bike was split in two but Thomas was able to get quickly back on his way, catching up to the peloton on the last of the day's seven categorised climbs.

"I'm fine, but it's just frustrating - obviously it was a key moment in the race," said Thomas, who emerged from the incident largely unscathed but for the odd graze on his arm.

"Woods crashed, and just took out Gianni and me. I got tangled in Gianni's bike and took some time to get going.

"The boys did a great job. I caught up for the final bit, and moved up through the group, but by the time I was in the first 10 or 15 positions, that's when they sprinted over the top for the bonus seconds.

"So I was kind of gassed for a bit. It's annoying, and frustrating, but at the same time, to come back like I did shows I had good legs." 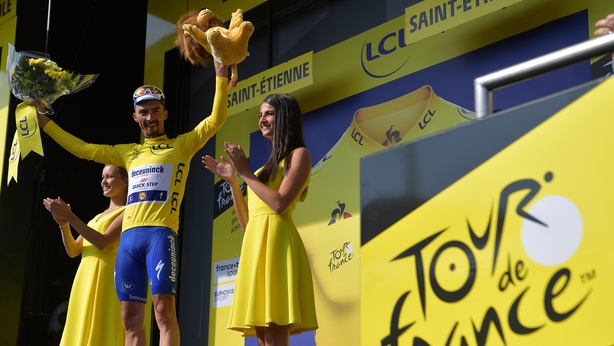 Though Alaphilippe (above) and Pinot could not catch De Gendt, crossing the line some six seconds later, third place on the day was enough for Alaphilippe to take yellow back from Trek-Segafredo's Giulio Ciccone.

Pinot, meanwhile, picked up 28 seconds - including bonuses - on his general classification rivals to become the best placed of the main contenders.

Alaphilippe now leads by 23 seconds from Ciccone with Pinot third, 53 seconds down.

Ireland duo Dan Martin and Nicolas Roche both finished inside the top 40.

Martin was 32nd, 26 seconds off the pace while Roche claimed a solid 38th place finish, 1:46 behind the stage winner. They are 16th and 43rd respectively in the general classification.

He moved clear with De Marchi on the Croix de Part, and then went solo with 14km to go.

Alaphilippe and Pinot launched their move on the final climb but could not reel him in.

"It hurts so much but it's wonderful," De Gendt said "It's also mission accomplished for the team. Our goal was to come to the Tour for winning a stage.

"We almost got it with Caleb (Ewan) yesterday. I've had very good feeling already for the whole Tour and I had amazing legs today."