Greg Van Avermaet extended his lead in the yellow jersey with a superb ride as Julian Alaphilippe won stage 10 of the Tour de France.

Ireland's Dan Martin was part of the chasing peloton 3' 23" down on the stage winner, crossing in seventh.

Having started the day in 24th position in the general classification, the UAE Team Emirates rider climbed seven places, though did concede almost a minute and a half on the yellow jersey.

"The next two days are going to be brutal and after the rest day everyone is a bit unsure how they are," he said afterwards.

"It was a block head wind, (on the final climb). Every bone in my body said don’t attack. But I knew if guys were five or 10 seconds off the back, by the time we reach the bottom it could be one minute."

Van Avermaet was expected to surrender the race lead he has held since the stage three team time trial as the race moved into the Alps, but the Olympic champion defied predictions as he joined a breakaway and stayed away on the road to Le Grand-Bornand.

The BMC rider crossed the line at the end of the 158.5km stage from Annecy fourth on the stage but around a minute and a half ahead of the main group of contenders, which included Team Sky's Chris Froome and Geraint Thomas, plus Adam Yates of Mitchelton-Scott.

Alaphilippe, 26, delivered his first career Tour stage win after moving off the front of the break at the summit of the Col de Romme, 28.5km from home.

The Quick-Step Floors rider gradually pulled away as he turned a bid for the climbers' polka-dot jersey into a first French stage win of this Tour.

After his BMC team-mate Richie Porte crashed out of the Tour on Sunday, Van Avermaet started the second week with no agenda but to stay in yellow as long as he could, and put in a ride to honour the jersey here.

He joined an 18-strong break that had moved seven minutes clear by the time they crested the summit of the Montee du plateau des Glieres, heading on to the gravel roads over the plateau made famous by the French resistance in World War II.

Sky were pacing the peloton behind but after slowing the pace to wait for Froome - who suffered a puncture on the gravel - they could not fully reel in the break.

The provisional general classification showed Van Avermaet's lead over Thomas growing to two minutes and 22 seconds, with Movistar's Alejandro Valverde up to third, three minutes and 10 seconds down.

Irish rider Martin is content with his efforts today which keeps him in the hunt after a crash over the weekend set him back. 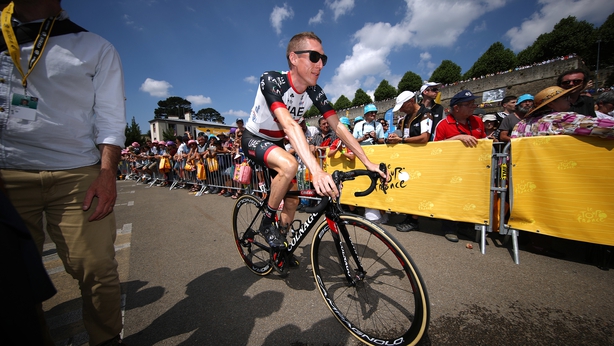 "It’s nice to get the first one out of the way. It’s always a bit nervous after the rest day. I’m pretty happy with that!

"It was a block head wind (one the final climb), and every bone in my body said don’t attack. But I knew if guys were five or ten seconds off the back, by the time we reach the bottom it could be one minute.

"The next two days are going to be brutal and after the rest day everyone is a bit unsure how they are."