Italy's Elia Viviani lived up to his pre-stage status as favourite by winning the bunch sprint into Tel Aviv on the second day of the Giro d'Italia.

The Quick-Step Floors rider appeared to be completely out of position as the sprinter's teams jockeyed for position through a series of 90-degree turns in the run-in to the finish on the seafront of the Israeli city but the 29-year-old blazed through a gap by the barrier and won with something to spare.

Trailing in his wake were Polish-born Italian Jakub Mareczko and Ireland's Sam Bennett.

With many of the big-name sprinters absent from the Giro, Viviani versus Bennett could be a key battle in this race, although there are relatively few opportunities for the bigger, faster men in this notoriously difficult race.

Ryan Mullen (70th) and Nicolas Roche (89th) both finished in the bunch.

Viviani was not the only big winner on the day as Australia's Rohan Dennis got his hands on the leader's pink jersey 24 hours later than he and his team had hoped on Friday.

That was when he put in a blistering time trial in Jerusalem only to see world champion Tom Dumoulin, the last man to roll down the start ramp, pip him by two seconds. 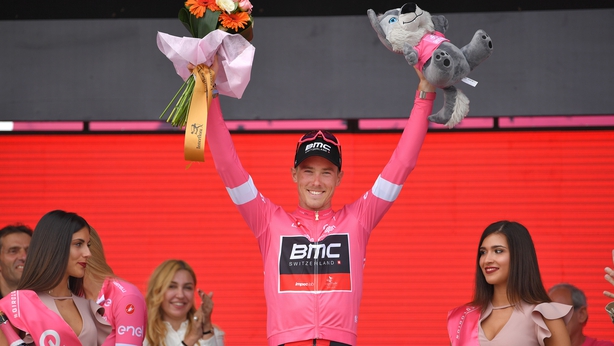 It was a tough one to take for Dennis and his BMC team, who had targeted winning the short opening stage as the perfect way to honour their founder and owner Andy Rihs, who died last month.

Dennis claimed the lead with a wonderful piece of opportunism and teamwork. With a bonus of three seconds available at each of the race's intermediate sprints, BMC put in a huge turn to set Dennis up for the sprint to the line, with Viviani close behind, although he was just stretching his legs for the real prize another 60 kilometres down the road.

Speaking to reporters afterwards, Dennis said: "I missed the 'maglia rosa' by very little yesterday but I made it today thanks to teamwork. My team-mates led me out for 20 kilometres to win this time bonus, and even before then they made sure no one escaped up the road."

Viviani was also understandably beaming with pride at the finish and he dedicated his second Giro victory to his girlfriend Elena.

After the drama of Friday's warm-up ride crash and below-par time-trial effort, Team Sky Chris Froome had an uneventful day on the 167-kilometre jaunt from Haifa to Tel Aviv.

Sunday's long, hot and bumpy ride through the Negev Desert to the Red Sea resort of Eilat will be a truer test of how well he has bounced back from his tumble.