Amnesty International has accused Israel of trying to "sportswash" the country's reputation by hosting the Giro d'Italia while it cracks down on Palestinian protesters.

Cycling's second biggest race after the Tour de France, the Giro starts in Jerusalem on Friday, with two further days of racing in Israel over the weekend before the action resumes in Sicily on Tuesday.

Israeli-Canadian billionaire Sylvan Adams and the Israeli government have spent at least €17m on bringing the Giro's "Big Start" to the Middle East - the first time the race has started outside Europe - but the largest sports event Israel has hosted will begin against a backdrop of renewed violence.

Amnesty claims the Israeli military has killed 35 Palestinians and injured more than 5,500 others since weekly protests started in the Gaza Strip on Friday, March 30.

In a statement, the human rights group's UK director Kate Allen said: "We're not going to tell the Giro d'Italia organisers where they should and shouldn't start the race, but the Jerusalem launch inevitably means Israel's dismal human rights record is going to be in the spotlight.

"The authorities in Jerusalem may have thought that the glitz of Giro d'Italia might have a 'sportswash' effect, removing some of the stain of Israel's human rights record. Instead, it's likely to bring it back into focus yet again."

Allen said the race will begin only weeks after the security forces "unleashed excessive, deadly force against Palestinian protesters in Gaza, including children", and Friday's stage will start next to East Jerusalem, the disputed part of the city where "Palestinians are facing house demolitions, illegal settlement building and a host of restrictions on their movement".

As a result, Allen urged the riders to be ready to answer questions about the human-rights situation and use their influence to make sure protests are not suppressed, Palestinian contractors are treated well and Palestinian spectators are allowed to watch the race.

RCS Sport, the Giro's owners and organisers, declined to comment on the specifics of the Amnesty statement but said they were here "to organise a sports event".

The issue was also not addressed during a press conference attended by Adams, three Israeli government ministers and the Israeli police commissioner at the race headquarters in Jerusalem on Wednesday.

Adams, however, did say he wanted to bring the race here to show the world "this beautiful country - the only democracy in the region and an open, safe and free society". 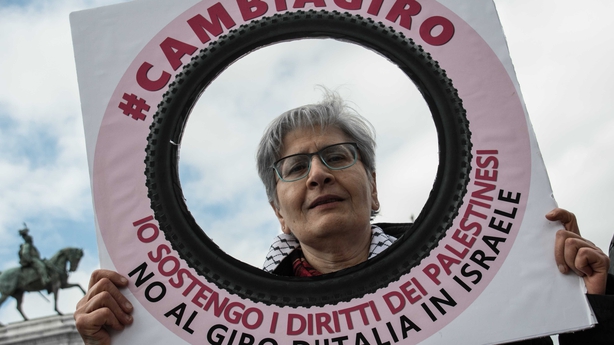 Police commissioner Zoha Dvir added there would be more than 4,000 police on duty to ensure everyone's safety this week and said they had been planning this event for more than nine months.

The overall message from the race organisers and their hosts was that this event represents a unique opportunity to build the Giro's profile, showcase Israel's burgeoning tourism sector and boost Israeli cycling.

On the latter, Adams, who has funded a new velodrome in Tel Aviv and co-owns the Israel Cycling Academy team which is taking part in the Giro, said he wants to turn Israel into "the Middle East's Amsterdam".

On the more vexed issue of Israel's politics, the tourism ministry's director general Amir Halevi told Press Association Sport: "I think the situation has changed since (the 9/11 attacks in the United States) and the recent attacks in Europe - there is more understanding of terrorism now.

"The situation is complicated here, of course, but we will continue to try to negotiate and work things out.

"But Israel is safe. Can you go out at night in Central Park in New York or the Copacabana in Rio? You can in Jerusalem and Tel Aviv.

"In regards to terrorism, there are things we have to deal with from time to time but that's what we do."