Lukas Postlberger upset the odds to take victory on the opening stage of the 100th Giro d'Italia in Olbia.

A bunch sprint had been expected at the end of the 206 kilometre stage from Alghero and Postlberger went to the front of the peloton with two kilometres left to start the lead-out for his Bora-Hansgrohe team-mate Sam Bennett of Ireland.

But he saw a gap open up behind him and pushed on to take his first WorldTour victory - and the famous pink jersey - much to the Austrian's own disbelief.

Behind, big-name sprinters Caleb Ewan (Orica-Scott) and Andre Greipel (Lotto-Soudal) were left to settle for second and third respectively, while Bennett was 10th.

Coupled with the climber's blue jersey for his team-mate Cesare Benedetti, part of the day's breakaway, it was a glorious day for Bora-Hansgrohe, who hold all four jerseys at the end of the first stage. 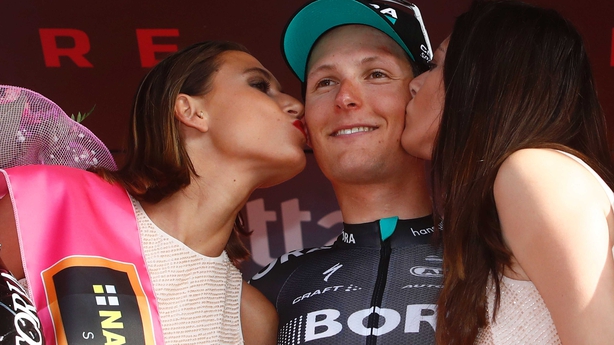 Overall contenders Nairo Quintana of Movistar and Geraint Thomas of Team Sky finished safely in the pack despite the disruption caused by a late crash, which was just outside the 3km cut-off point which guarantees riders will not lose time because of an incident.

However, not everyone was so lucky as some riders conceded more than a minute in the late confusion, with LottoNL-Jumbo's general classification hopeful Steven Kruijswijk giving up 13 seconds.

With time bonuses applied, Postlberger leads the race by four seconds from Ewan.

"It's a surprise," Postlberger said. "I knew my shape was good. We wanted to try to lead Sam Bennett out but he lost my wheel and when I saw a gap, I decided to try myself.

"I gave all I had. It worked out. This is my first professional win and I get the maglia rosa. It will take me a long time to believe this."