International Cycling Union (UCI) president Brian Cookson has said he would be surprised if an investigation into British Cycling by the country's anti-doping agency UKAD found wrongdoing within the sport.

Local media says the probe concerned Team Sky and former Tour de France winner Bradley Wiggins, with a specific focus on the delivery to team Sky in June 2011 of a medical package after the Dauphine-Libere race and ahead of that year's Tour.

UKAD has confirmed that the investigation into "multiple allegations" is in place but did not give any specifics.

"In my time as British Cycling president we insisted on the highest possible standards of integrity in anti-doping. I would be surprised and disappointed if things have not been continued at that level," Cookson told British media.

"Let's see what this investigation produces."

Wiggins has been in the spotlight over his past use of Therapeutic Use Exemptions (TUEs), which allow athletes to take banned substances for verified medical needs and are signed off by sports federations.

It showed Wiggins was given permission to have legal injections of the banned drug triamcinolone to treat breathing difficulties before the 2011 and 2012 Tour de France and 2013 Tour of Italy.

On each occasion the TUE was approved by British authorities and cycling's governing body, the UCI, and there is no suggestion Wiggins broke any rules.

Former Team Sky rider Jonathan Tiernan-Locke also said in a BBC interview that the painkiller Tramadol had been "freely offered" at the 2012 road world championships.

The exemption which allowed Wiggins to use an otherwise banned drug was recently described as "ethically wrong" by fellow cyclist Nicolas Roche, who called for a revision to the system as TUEs are granted too easily under current regulations. 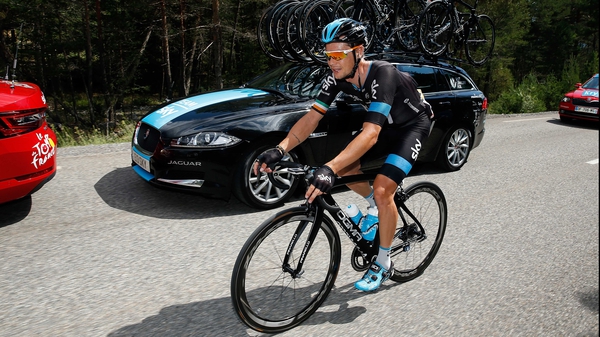