Italian cyclist Vincenzo Nibali cemented his reputation as one of the great grand tour riders after he won the Giro d'Italia for the second time today.

Astana rider Nibali finished safely after organisers stopped the clock for the closing kilometres of the 21st and final stage  in Turin because of rain.

The stage was won by German Nikias Arndt after home rider Giacomo Nizzolo was disqualified for leaving his line during the final sprint.

Nibali, who won the 2013 Giro, was battered and bruised after a terrible performance in last Sunday's uphill time trial and Tuesday's mountain stage to Andalo, but when all seemed lost he hit back in style.

The Astana rider won solo in Risoul on Friday when overall leader Steven Kruiswijk crashed, and he put the hammer down on Saturday by dropping his closest rivals Alejandro Valverde and Esteban Chaves, who was wearing the pink jersey.

His team considered pulling him from the race earlier this week after his mediocre form saw him slip out of contention.

The first to win the Giro as the Italian champion since Felice Gimondi in 1969, Nibali eventually beat Colombian Chaves (Orica-GreenEDGE) by 52 seconds and Spain's Alejandro Valverde (Movistar) by 1:17.

It is Valverde's seventh podium in a grand tour although he has only won one, the Vuelta 2009. 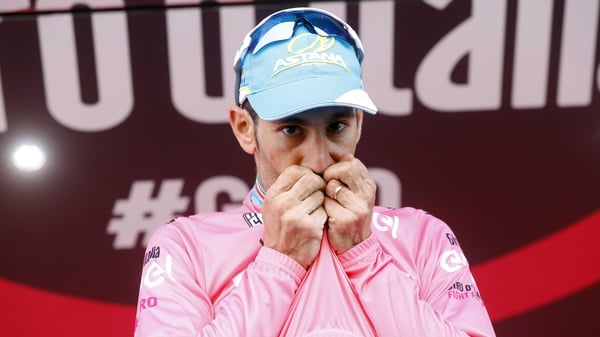