Marcel Kittel produced another blistering sprint finish to make it back-to-back stage victories at the Giro d'Italia and claim the leader's pink jersey.

Kittel's victory, the 13th Grand Tour stage win of his career, and the accompanying 10-second time bonus, saw the Etixx-QuickStep rider move into first place in the overall classification ahead of Holland's Tom Dumoulin, winner of Friday's opening stage time-trial.

Kittel is the first German to wear the maglia rosa in a decade and he now boasts a nine-second lead over Giant-Alpecin's Dumoulin, with Andrey Amador (Movistar) a further six seconds back in third.

The 27-year-old Kittel told Eurosport: "I'm super super happy to win my fourth stage of the Giro and also to have this leader's jersey. I can say now that I have worn the jersey in the Tour (de France) and also the Giro d'Italia, something very unique and something I'm really proud of."

While it was an historic day for Kittel, it was a different story for 2014 Tour de France runner-up Jean-Christophe Peraud, who was forced to withdraw following a crash.

That incident happened midway through Sunday's 190-kilometre ride from Nijmegen to Arnhem, which saw Johann van Zyl, Maarten Tjallingii, Sergio Berlato and Julen Amezqueta stage an early breakaway and open up a lead of over eight minutes as the peloton let them go.

The quartet still led by around two and a half minutes with 25 kilometres to go but that gap had been slashed to less than 50 seconds with 10km left, by which time Van Zyl had broken away on his own.

The South African, a stage winner in the Tour of Austria last year, valiantly tried to stay clear but he was eventually swallowed up by the main pack with under two kilometres remaining.

That set things up for the sprinters, but Kittel blew away his competitors with barely a challenge in the final 200m to claim both the stage victory and the maglia rosa.

Kittel assured it was far from straightforward, saying: "It was a super tough day. A lot of wind, teams were really nervous, it was really difficult to stay in position in the end.

"The breakaway stayed quite long away and we had to go full gas, so my boys did an amazing job there and at the end they got us into position." 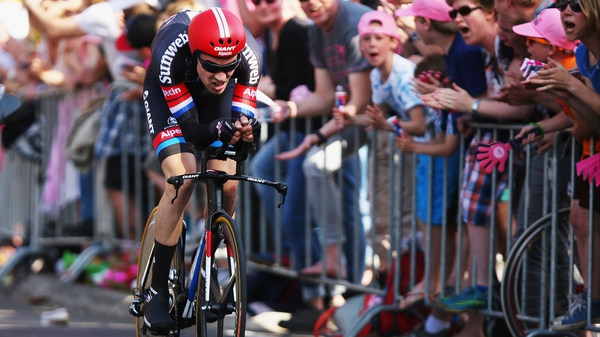