Caroline Ryan lies in sixth place after two rounds of the Women’s Omnium at the UCI Track Cycling World Championships in Paris, while Eoin Mullen secured a sea-level personal best in the 200m Sprint time trial.

Ryan sensationally lapped the field in the Scratch Race, the first round of the Omnium, eventually finishing third, and followed it with a tenth place in the Pursuit, putting her in sixth place going into round three, which was due to take place on Saturday evening.

Ryan was also due to race in the Women’s 15km Scratch Race on Saturday evening.

She said she was pleased with her sixth position going into round three, saying: “I’m delighted. Really, the Scratch Race went perfect.

“I saw girls going at the right time and just went with it to see, and you know, the legs felt good, they’ve felt good since I’ve come here really. I’ve worked really hard on the sprint. It’s great to finally see it, and for it to come right at the worlds as well.”

Mullen, meanwhile, got off to a great start, qualifying for the round of 16 in the men’s Sprint with a time of 9.939sec. However, in the next round he was beaten by New Zealand rider Edward Dawkins.

20-year-old Mullen also went in the Men’s Individual Pursuit, where he finished in seventh place.

A fast time of 4mins 22.669secs was not enough to make the medal ride-off in the event, leaving Mullen somewhat disappointed.

He said he had hoped for a better result, and that: “It was all going to plan for the first 2km, but I couldn’t quite stay on the power.

“I wasn’t all there today, the team around me has been incredible, I’m more gutted I couldn’t do right for them.”

In the Men’s Omnium, Martyn Irvine lies 17th going into the final round, after a 14th place finish in the 1km Time Trial and 17th in the Flying Lap. 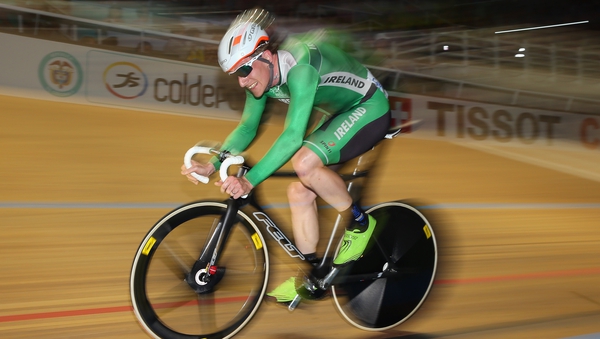 Irvine can only manage 10th in world scratch race