Dylan van Baarle's Tour of Britain victory was confirmed as he finished safely in the peloton on a final stage won by Marcel Kittel (Giant-Shimano), the winner of stage one in Liverpool a week ago.

All of the Irish riders were safely in the pack on the final stage leaving Ryan Mullen 85th and Jack Wilson 103rd.

McNally dramatically exited the escape group, tumbling to the tarmac after apparently touching a wheel in the group, a fall which required a bike change.

The last remnants of the breakaway were caught with 5.5km remaining as the sprinters' teams fought for position in anticipation of a hectic dash for the line.

It pitted Kittel against Mark Cavendish (Omega Pharma-QuickStep) and just as it looked like the Manxman had overcome his rival, the German held him off at the line for another win on British soil in 2014.

Kittel has won Giro d'Italia stages in Belfast and Dublin, Tour de France stages in Harrogate and London and Tour of Britain stages in Liverpool and London.

Wiggins clocked a time of nine minutes 50 seconds over the 8.8km course.

Ryan Mullen was quickest of the Irish riders in seventh position with young Jack Wilson outside the top 100.

Van Baarle, from the Garmin-Sharp team, had held a 19-second advantage ahead of the first of Sunday's stages after taking the yellow jersey in Saturday's seventh stage between Camberley and Brighton. 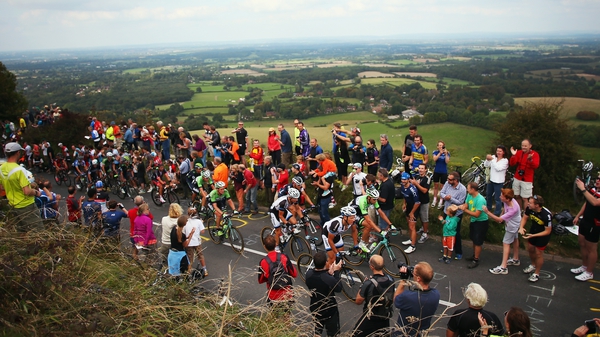