Alberto Contador suffered a broken leg as he crashed out of the Tour de France on Monday as Vincenzo Nibali took full advantage with a scintillating victory at La Planche des Belles Filles which saw him reclaim the yellow jersey.

Two-time winner Contador crashed on the 161.5kilometre tenth stage from Mulhouse and, after struggling on for 20km in an effort to play catch-up, gave up and withdrew to his Tinkoff-Saxo team car.

It read: "Alberto Contador suffered a shin bone fracture after his crash 95km from the finish of stage ten between Mulhouse and La Planche des Belles Filles."

The Spaniard's departure deprives the race of another previous winner after 2013 champion Chris Froome (Team Sky) withdrew with fractures to his left wrist and right hand on stage five last Wednesday.

Andy Schleck (Trek Factory Racing), who inherited the 2010 title from Contador following an anti-doping infringement, quit the race with a knee injury last Tuesday, although the Luxembourg rider is a shadow of his former self.

Contador crashed on the approach to the third of six categorised climbs, the Col du Platzerwasel.

The Spaniard received strapping to his right knee and lost four minutes as a result of the delay, falling nine minutes behind the day's breakaway, which held a five-minute lead on the peloton.

The Astana team of Vincenzo Nibali led the main bunch and did not increase the pace on the 7.1km, category one ascent as Contador's team-mates dropped back to help him.

But the Spaniard struggled to reduce the arrears in the mist-shrouded Vosges Mountains with more than 80km of the stage remaining.

Contador went for scans after the race and it was reported he had suffered a fractured tibia (shin bone). 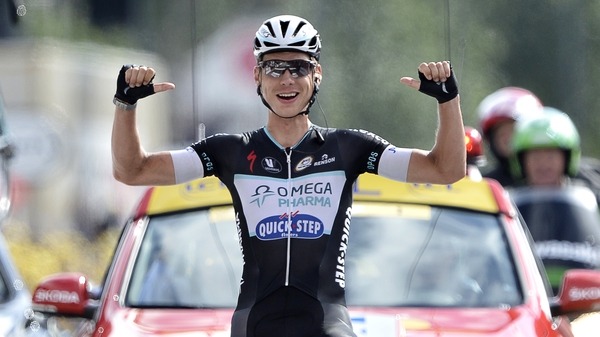 Martin solos to victory in stage nine of Le Tour