At the end of two days of racing, Ireland’s Martyn Irvine has finished third in the omnium event at the Dublin International Grand Prix, behind German riders Maximilian Beyer and winner Lucas Liss.

However, third was enough to secure a place for Irvine in the upcoming Track Cycling World Cup Series.

Having three races scheduled on day two of the grand prix afforded Irvine the opportunity to overhaul the Germans, but from the off it looked like a big ask.

In the men’s omnium kilo time-trial, Liss of the German national team set a new course record for the Sundrive Road Velodrome, clocking a time of 1:06.543. Irvine had to settle for fourth place behind team-mate Ryan Mullen in third and Beyer in second.

In the omnium flying 250m, it initially looked very positive for Irvine as he smashed the Sundrive course record in a time of 14.869 seconds.

The Germans responded with a devastating blow as Beyer clocked 14.444, and then Liss set his second course record of the day by covering the distance in a stunning time of 14.167.

Irvine faced a huge challenge going into the last omnium event of the grand prix, the points race.

Eighty-seven laps of the track with points for sprints offered Irvine a lifeline, but the duo of Beyer and Liss proved unstoppable as Irvine battled on courageously.

Attacking the field from the start, Irvine took the first scalps, but the Germans weren’t for conceding and his every move was marked.

Team-mate Mullen, who set a new national record yesterday in the 4k pursuit, clocking a time of 4:36.74, worked tirelessly for Irvine, but it ultimately became a world class duel between Liss, Beyer and Irvine.

One last throw of the dice nearing the end of the forty kilometres saw Irvine try to lap the field to secure race winning points, but the finish line came two hundred metres too soon for the Newtownards man. Irvine finished his last race of the day in third place behind Beyer and winner Liss.

In the woman’s events, Kildare woman Caroline Ryan of the Irish national team continued her domination of the grand prix, taking second in her first race of the day, the women’s omnium 500m time-trial, in a time of 39.537 seconds.

Ryan was pipped by 0.47 of a second by Catalina Rayo Ramis of the Spanish Establiments Penya Cyclista team 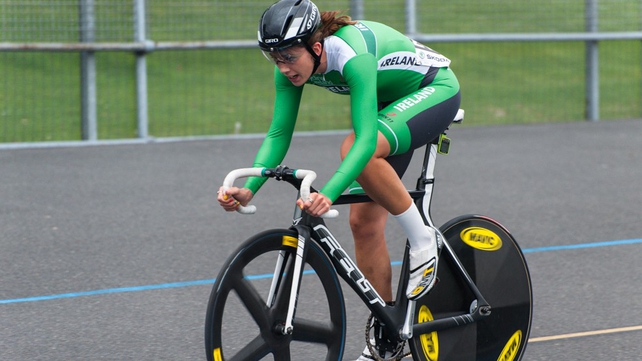 Ryan also had to settle for second in the flying 250m time-trial behind specialist sprinter Ramis.

It was the omnium points race over a distance of 25km that saw Ryan annihilate the field as she lapped the bunch twice.

Commenting to RTÉ before the race, Ryan suggested that the longer distance of the points race suited her endurance capabilities, and this was born out as the assembled crowd cheered a triumphant Ryan to the overall omnium gold medal, with Spaniard Ramis, and Belgian Sarah Inghelbrecht taking silver and bronze respectively.