Former UCI president Pat McQuaid is still to decide whether he will take part in the Cycling Independent Reform Commission [CIRC] set up by his successor Brian Cookson, vowing not to be drawn into a "witch hunt".

McQuaid was deposed by Cookson in September. Cookson created the CIRC to probe possible past wrongdoings, including whether the UCI was complicit in Lance Armstrong's doping.

Armstrong was stripped of his seven Tour de France titles and all results dating from 1 August 1998 after a United States Anti-doping Agency investigation uncovered his use of performance-enhancing drugs.

The CIRC, which has the blessing of the World Anti-doping Agency [WADA], is chaired by Switzerland's former state prosecutor Dick Marty and aims to conclude its investigation in the next 12 months.

McQuaid has kept a low profile since leaving the UCI. He has had no contact with the CIRC and is still to decide whether to volunteer to give evidence, but vehemently denies any wrongdoing.

McQuaid, UCI president from 2005 to 2013, told PA: "I haven't made my mind up yet. I need to be convinced that this commission is going to look into all of the aspects of the reasons why doping was prevalent.

"That is who was actually responsible, not just the UCI, but also people like WADA and USADA.

"As I see in the terms of reference, there's no inquiry into what their responsibilities may or may not have been in relation to doping and the fight against doping.

"I don't want to see a witch hunt into me and Hein Verbruggen only, when others have been responsible [for anti-doping activities] as well and should be asked to account for themselves as well."

The CIRC will assess the period from 1998 to 2013 - all of Armstrong's post-comeback from cancer years and the period when Verbruggen and McQuaid were president.

Among the allegations being investigated is that Armstrong made a $100,000 donation for blood sampling equipment in 2002 to cover up a positive test.

McQuaid, who has admitted it was wrong of the UCI to accept the donation, repeated his belief the organisation was at the vanguard of anti-doping during his tenure.

He is adamant there was nothing to cover up as there was no evidence Armstrong tested positive.

"As far as I'm concerned the UCI, during my period as president, which is all that I can speak for, was the leader in the fight against doping," McQuaid said.

"I would say the same goes for my predecessor's period. The UCI was the leader in the fight against doping.

"From that point of view, I don't think the UCI should be taken to task for what may or may not have happened. I have to be convinced that this isn't setting out to be a witch hunt.

Verbruggen has similar concerns to McQuaid and, in an email exchange with Press Association Sport, insisted there was no need for a cover-up.

"There is simply nothing to hide as some 25 previous and current UCI anti-doping staff members can witness," the Dutchman wrote.

As the votes were being counted at the UCI congress in Florence last September, Swiss private investigators waited outside UCI headquarters in Aigle.

As soon as Cookson was declared president, the investigators entered and seized computers, including McQuaid's. McQuaid’s files were copied and returned last week.

Cookson insists his only agenda is to uncover the truth.

Speaking at the Track Cycling World Championships in Cali, Cookson told PA: "I've never said anything other than there are things that need to be explained and investigated.

"If they're proved to be innocent, that's fine, of course it is.

"But we need that proper independent investigation of those very damaging allegations that have come out over the last few years."

Now the CIRC has been established, Cookson has handed over responsibility, but the Briton expects McQuaid and Verbruggen to come forward.

Cookson added: "I expect all of those people who said this was just what they were waiting for will be as good as their word now. Let's see what happens."

Armstrong has also previously stated his willingness to participate, but the Texan is embroiled in a number of legal battles and it remains to be seen if he commits to the CIRC. 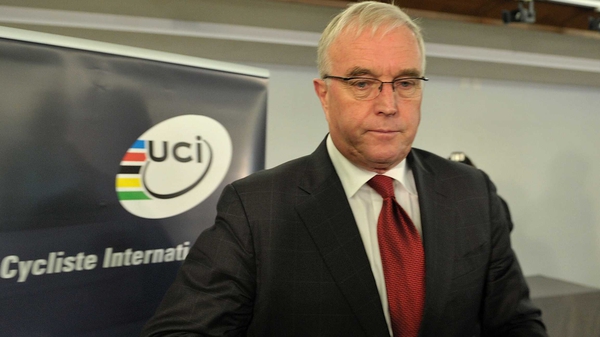