A fluent 84 from Lorcan Tucker and an inspired 4-25 from Curtis Campher have led Ireland to victory in America and ensured a 1-1 series finish against the USA.

Ireland entered the action on the back of a shock defeat in Florida, the first time a full ICC member has faced the USA on American soil, and set about getting back on terms.

Tucker posted his second half-century of the series in an innings of eye-catching quality – he struck nine fours an/d three sixes in a 56-ball stay that held together the Irish innings and helped post a defendable target. This was Tucker's highest international score, passing his 83 against Afghanistan in an ODI in January.

Campher, meanwhile, bowled an aggressive spell, effecting a run out from his own bowling to claim the first wicket before capturing four wickets – three of the wickets coming from his last over, the 18th over of the innings.

After losing the toss and being sent in to bat under the lights, Ireland captain Andrew Balbirnie and opening partner Paul Stirling looked to try and set a more positive tone for the Irish batting unit, with Stirling striking the first ball to the boundary. However, just five balls later Ireland's talisman was adjudged LBW, out for five.

Balbirnie clattered two boundaries through the off-side from the next two balls from Saurabh Netravalkar, but fell hooking a short ball for the second match in a row, out for 10.

Tucker, batting at third for only the second time, then took the reins of the innings.

Resuming his battle with the US paceman Muhammad Ali Khan from the last match, Tucker struck Khan for a lofted six over mid-on and a chipped shot off his pads over square leg for four from Khan’s first over to show his clear intent.

The Pembroke and Leinster Lightning batter brought up his second half-century in consecutive matches from 32 balls, and looked comfortable throughout.

Less, though, his teammates with Ireland beginning to lose wickets at regular intervals. Where Tucker timed the ball well, and scored at a strike rate of 150 over his innings, the rest of the Irish batters seemed to struggle with their timing, only Curtis Campher (17) and Simi Singh (13) registered double figures in the remainder of the innings.

Tucker’s lone hand had its moments of good fortune – being dropped twice – but he rode his luck and even looked set to threaten a possible century before falling in the penultimate over of the innings trying to reverse sweep a yorker from Netravalkar.

Ireland’s 150 was looking 10-15 runs below on this high-scoring ground, and would require a disciplined bowling effort.

Ryan Scott was promoted to open the US innings and immediately set to work striking two boundaries in the first Mark Adair over. However, a brilliant piece of fielding off his own bowling saw Campher run Scott out for 11 and the Irish side visibly seemed to lift in response.

Ritwik Behera was caught by Shane Getkate at fine leg off Adair for 16, and captain Monank Patel – after a quick flourish – fell for 26 to give Ben White his first wicket, Adair with the outfield catch.

Gajanand Singh, who hit a Player of the Match-winning 64 yesterday, again looked confident in compiling 23 from 20 balls, but fell leg before to Campher just when he was looking set to launch another late innings attack.

With the run rate required climbing steadily towards two runs-a-ball, Adair delivered an excellent display of death overs bowling, taking the pace off the ball and conceding just four runs from the 16th over.

The 18th over by Campher was a true rollercoaster – a no-ball six, a second six, and then three wickets in five balls separated by a wide saw USA needing 28 from the last two overs. Barry McCarthy and Adair held their nerve to bowl out the final 12 balls, and Ireland were victorious by nine runs. The series finished level at 1-1. 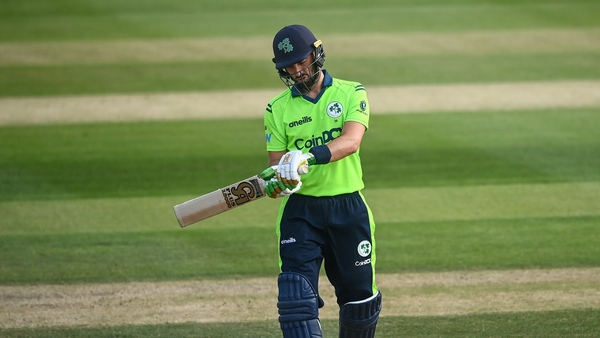