Travis Head crashed a free-spirited century as Australia assumed control of the first Ashes Test, aided and abetted by a costly no-ball from Ben Stokes and painful errors in the field.

After being dismissed for 147 on the opening day at The Gabba, the tourists had little margin for error with the ball but flagged in the Brisbane heat on a draining second day that ended with Australia 196 ahead on 343 for seven.

Old adversary Warner made 94 but had three let-offs along the way, clean bowled by an overstepping Stokes on 17, dropped by Rory Burns in the slips on 48 and surviving a close-range run out on 60 when Haseeb Hameed missed the target from a couple of yards.

He was eventually taken out by a seriously impressive Ollie Robinson, who took three for 48, but Head was on hand to hammer home the advantage with 112 not out. He blazed an 85-ball century - the third fastest in the long history of the series - swinging the pendulum decisively in his side's favour after a flurry of four wickets for 29 either side of tea.

Head showed real bravery to bat on after a painful blow to forearm from Mark Wood early in his innings and was pinned by a wayward beamer just before the close, a worrying moment that initially looked dangerous.

England's decision to leave record-breaking seam duo James Anderson and Stuart Broad will continue to leave fans scratching their heads, particularly with spinner Jack Leach victimised to the tune of 95 runs in 11 overs.

Stokes' flawed footwork still rankled, though, with the revelation that his would be 'dismissal' of Warner was one of 14 no-balls he sent down in the morning session, none of which were called in real time. It later transpired that the line technology which is supposed to monitor the front foot had malfunctioned and was not being used by the third umpire.

England needed a strong start with the new ball and Robinson gave them one. Bowling with skill and control on his first Ashes outing, he was into his third over when he nipped one away and had Marcus Harris nicking low to Dawid Malan at third slip.

It briefly looked like more could follow, with Wood hitting 94mph in his first over and causing Warner some clear discomfort. Stokes, returning here after a five-month hiatus, also had a lively start.

His second ball sailed agonisingly wide of Malan off Warner's edge and his fourth snaked through the defences to clip the top of off stump. Stokes' muted celebrations hinted at what would follow, with a deflated Warner recalled to the crease after replays showed Stokes' boot clearing the whitewash.

That was as close as England got to a second wicket before lunch, with Marnus Labuschagne leaving intelligently and punishing the bad balls as they crept in while Warner scrapped his way into the game.

A competitive battle shifted dramatically in Australia's favour when Leach entered the attack, with both men showing him thinly disguised disdain. His first three overs shipped 31, including two towering sixes from Warner and one from Labuschagne.

The latter reached 50 just before lunch but Warner should never have followed him to the landmark, nicking Robinson's fourth ball of the straight to slip only for Burns to fumble the chance. Having been dismissed by the first ball of the series, this was another moment to forget.

Warner was scoring at a good rate but kept offering opportunities, not least when he turned on his heels having stepped down the track. He fell flat on his face, dropped his bat and gave Hameed a golden chance to take his stumps from short leg. Remarkably, he missed the target.

For a short period England rallied, Labuschagne (74) carving Leach to point to end a draining stand of 156 and long-time nemesis Steve Smith banking a rare failure when he was caught behind for 12 off the hardy Wood.

Robinson then took two in two balls, Warner's patchy but priceless knock ending with a miscue to Stokes at mid-off before Cameron Green offered no shot to a big inswinger and lost his off stump.

Chris Woakes chipped in with the wicket of debutant Alex Carey but Head was soon making a nuisance of himself. He looked vulnerable early on but even when times were hard he refused to be boxed in.

He made hay against a visibly struggling Stokes, cracked Root over the ropes when he entered the fray and continued the uncomfortable theme of bullying Leach with fours and sixes. One shot away from a century he middled Woakes down the ground, celebrating his third Test ton with palpable emotion.

Root had opposite number Pat Cummins at leg-slip and Head was floored by Wood's accidental beamer, but it was Australia who walked off in a dominant position. 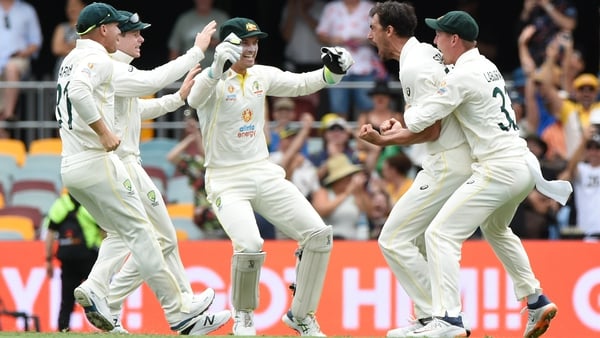 England dismissed for 147 after wretched start to the Ashes