Ireland captain Laura Delany led her side to victory over the Netherlands with a brilliant all-round performance in the second Group A match of the ICC Women’s World Cup Qualifier in Harare on Thursday.

Delany struck 75 from 75 balls and claimed 1-24 from 10 overs. Ireland’s longest-serving captain has blossomed under head coach Ed Joyce and again demonstrated why she's still a lynchpin of a squad she's been part of for 11 years.

She bailed Ireland out with the bat from a precarious position of 85-5, and then turned the screw with the ball to remove the dangerous Babette de Leede. Delany was then involved in two Dutch run-outs, and not surprisingly, was named Player of the Match.

Ireland lost the toss and were asked to bat first for the second consecutive game in the tournament, however this time the result went their way, unlike their opening defeat to Zimbabwe.

Ireland's openers Gaby Lewis and Leah Paul gave their side a solid platform with their second back-to-back half-century opening stand.

The left-hand/right-hand combination was used to great effect as the pair regularly turned the strike over and didn’t allow the Dutch bowlers to settle on a consistent line and length.

Lewis was the aggressor in the partnership, looking formidable as she pounced on anything over-pitched, finding the boundary seven times in her innings of 46 from 47 balls.

However, after seeing off the Netherlands seamers with ease, Lewis dragged a long hop from leg-spinner Caroline de Lange straight to mid-wicket, slapping her pads with her bat out of frustration at what was her first false stroke of the day.

With the score on 61-1 in the 13th over, Ireland’s batters were seemingly well set to push on for a big score, but just as they did during the last match against the West Indies, the girls in green lost wickets in clusters - with four wickets tumbling in the next five overs and Ireland teetering on 85-5.

Needing some cool heads and patient batting to recover the situation, it was left to captain Delany and the experienced Eimear Richardson to lead the fightback.

The pair batted decisively, running their ones and twos well, and finding the boundary regularly. Their 85-run sixth wicket partnership broken by leg-spinner Silver Siegers, with Richardson (27) falling leg before trying to sweep a quicker delivery.

Delany struck her third international half-century in the 50-over format from just 47 balls, and looked to push on further after the loss of Richardson. The skipper punched two boundaries through the covers and looked to be ready to accelerate further until she played around her pad to Siegers to also fall leg before for 75 off 75 balls.

Siegers then cleaned up the tail, finishing with figures of 4-24, and Ireland was all out for 199 in the 42nd over.

Orla Prendergast started well with the ball, removing opener Juliet Post with an in-swinger that knocked back the off stump, but Babette de Leede (34) and Sterre Kalis (47) stabilised the innings with a 59-run second-wicket stand. While the Dutch batting was cautious, the Irish bowlers couldn’t find a breakthrough until Delany introduced herself and soon had de Leede back in the pavilion, feathering a catch through to Mary Waldron.

Kalis found renewed support after the loss of de Leede with the aggressive Robine Rijke joining her for a 73-run stand for the third wicket – a partnership that seemed to swing the momentum firmly in the direction of the Dutch side.

Then, with the score on 139-2 in the 39th over, the Dutch stumbled and the Irish side pounced on their opportunity. In all, eight wickets fell for just 31 runs in just over eight overs. First, a slew of running mix-ups saw no less than three run outs, and then opening strike bowler Prendergast returned to the crease with renewed vigour and demolished the tail. The Pembroke pace bowler took 4-24 with all of her wickets bowled.

These were Prendergast’s first international wickets in the 50-over format, and couldn’t have come at a more important juncture with the game balanced on a knife edge.

Richardson wrapped up the Netherlands innings with her first wicket of the day, but the team performance - under the on-field leadership of Delany - stood out most impressively, and going into Monday’s final Group Stage match against Sri Lanka, head coach Ed Joyce will be pleased with the way his side handled the pressure and saw out today’s win.

Ireland’s next match is on Monday at the same venue against Sri Lanka. 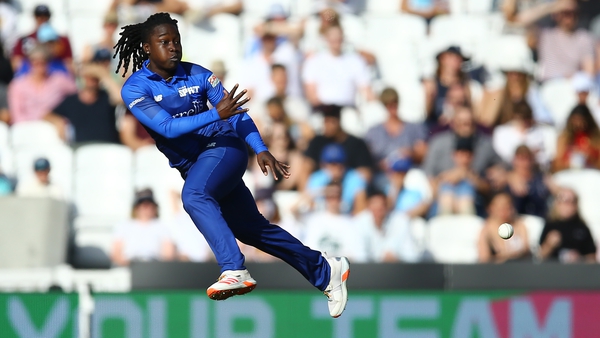