Ireland missed out on a place in the Super 12's phase at the ICC T20 World Cup as tournament debutants Namibia prevailed by eight wickets in their winner-takes-all clash in the UAE.

As he did in the chase against Netherlands, Namibia's David Weise broke Irish hearts, his rapid score of 28 from just 14 deliveries and a half century from captain Gerhard Erasmus, knocking Ireland out of the competition.

The result in the third group match means it's the Namibians who go through to the Super 12’s along with Sri Lanka.

Ireland won the toss and opted to bat on a hard grassless pitch in Sharjah, going with the same side that lost to Sri Lanka on Wednesday but were around 20 runs short in their total of 125 for 8.

Ireland got off to a decent start, with openers Paul Stirling scoring 38 off 24 deliveries before he was caught in the eighth over with Graham Ford's side on 62-1 while Kevin O’Brien didn’t last much longer when he fell, caught in the deep for 25 with Ireland at that stage on 67 for 2 in the ninth.

Andy Balbirnie and Gareth Delaney did not get going in their third wicket partnership adding just 27 in the next five overs with Delany struggling to just 9 before he was bowled by David Weise in the 15th over, reducing Ireland to 94-3. 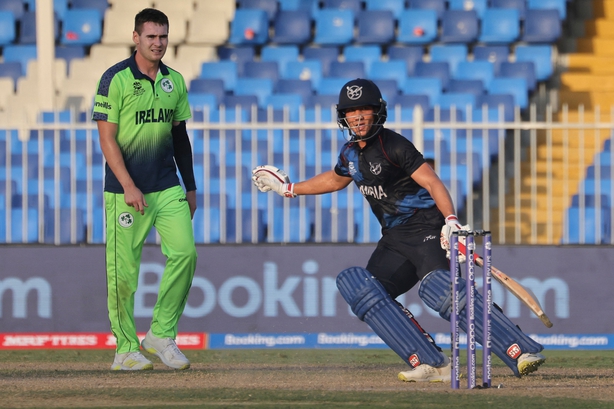 Balbirnie and Curtis Campher took Ireland past 100 by the end of the 16th over before the Irish captain Balbirnie was out lbw for 21 to the bowling of Jan Frylinck in the first ball of the 17th over with Campher bowled for 4 by the same bowler in the same over as Ireland's momentum from the opening partnership fizzled out.

In reply Ireland stifled Namibia in the 6 over powerplay and opener Craig William went for 15 brilliantly caught at mid-on by O’Brien off the bowling of Campher with the score on 25.

Mark Adair only bowled 1.4 overs before he left the field with a side strain with O’Brien having to finish off the over.

O’Brien and Campher produced a carbon copy to dismiss Greene for 24 in the 14th with Namibia at that stage on 73-2.

However, that brought the dangerous Weise to the crease, who took a liking to Craig Young’s bowling, hitting two sixes off the 15th to drag his side back into the match.

Young hit Erasmus’ stumps but failed to dislodge the bails and he and Weise took Namibia home in the 19th over and into the Super 12 with Ireland heading out of the competition with just one win from their three qualifying games.

Elsewhere in Group A, Sri Lanka's bowlers shone as they recorded a dominant eight-wicket win over the Netherlands to top the pool in style and head into the Super 12s brimming with confidence.

Sri Lanka had already qualified for the next stage but ensured they ended the First Round with a 100% record thanks to a quick-fire victory in Sharjah that took just 17.1 overs of total match-time.

Only Colin Ackermann (11) reached double figures for the Netherlands as brilliant bowling by the Lions reduced them to 37 for six at the end of the powerplay and ultimately skittled them for 44.

Lahiru Kumara ended with figures of three for seven, Wanindu Hasaranga took three for nine and Maheesh Theekshana two for three from just one over as the Dutch registered the second-lowest score in ICC Men’s T20 World Cup history -– coincidentally, behind only their total of 39 in the same fixture back in 2014.

The chase was never in doubt and Kusal Perera did the bulk of the damage as his knock of 33 from 24 balls saw them home with eight wickets and plenty of time to spare.