Ireland slipped to a 38-run defeat in the first game of the World Cup Super League series against Zimbabwe, despite a strong top-order display and a constricting performance from spin duo Andy McBrine and Simi Singh.

Chasing 267 to win, the hosts' chase got off to a steady start, Paul Stirling and William Porterfield content to bide their time and lay the platform rather than attempting to hit out with the fielding restrictions in place, progressing to 34-0 at the end of the powerplay.

The approach looked to have paid off as the pair began to open their shoulders, with Stirling drilling Luke Jongwe for a straight six to assert his dominance.

He fell for 32, dismissed lbw by Wellington Masakadza, with Andrew Balbirnie following not long after for 12, bowled through the gate by Wessley Madhevere, but another solid stand between Harry Tector and Porterfield ensured Ireland stayed in the ascendancy.

The pair added 71 for the third wicket at a good rate, with a slog-swept six by Tector off Sean Williams taking Ireland past 150 in style.

However, a stroke of strange fortune changed the contest, with Porterfield caught for 75 after a juggle and rebound off the shoulder of Dion Myers, and from there, Ireland struggled to recover. At that point, Ireland needed just over a run a ball, but without any other batter getting set - none of those to come in after Tector managed more than 15 - the rate began to spiral. 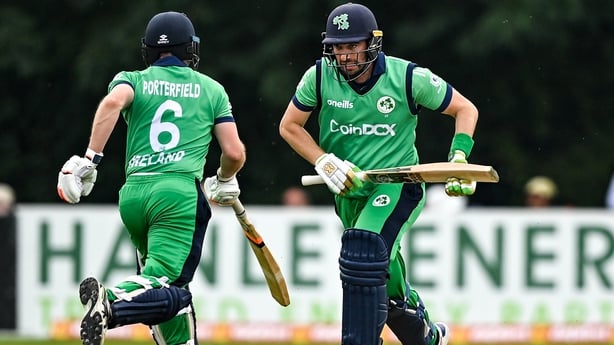 Tector forged a lone hand, and while he was at the crease there was some hope. But he fell immediately after passing fifty, a top-edge off Williams pouched by Blessing Muzarabani at short third man, and Ireland soon slid to 228 all out, with Muzarabani taking four of the last six wickets to fall. Having at one point been 187-3, the collapse read 41-7, with Zimbabwe left victorious.

Earlier, a topsy-turvy innings had seen Zimbabwe start and finish strong, only to be pegged back through the middle by a pair of miserly spells from Ireland’s frontline spinners, Singh and McBrine.

Craig Young struck early, removing Regis Chakabva caught at second slip in the fifth over with just 14 runs on the board, but Brendan Taylor and Craig Ervine combined to put on the most fluent stand of the day. The first full over of their partnership cost just one run, but from then on they scored at least one boundary per over.

The end of the powerplay brought no let up, with overs 11-13 costing 34 runs, and Taylor striking the first six of the day straight down the ground. A scoreboard error prompted him to celebrate 50, though he had only 49 to his name; the introduction of Singh ensured he would never reach the milestone, the off-spinner enticing the Zimbabwean to pick out the fielder in the deep.

The innings shifted with the dismissal, and McBrine’s entrance further halted Zimbabwe’s progress.

He dismissed Myers in his first over, the No 4 top-edging an attempted lap, and between them, McBrine and Singh proceeded to spin a web around the Zimbabwe batting effort.

Apart from a brief riposte from Sean Williams, who pulled and reverse-swept a pair of boundaries off consecutive Singh balls, there was near total control, with just 39 runs scored in the 16 overs in which they bowled in tandem.

Singh ended with the slightly more economical figures, bowling two maidens and conceding just 22 runs, while McBrine conceded 26 runs but no boundaries in his 10 overs.

Williams immediately cashed in when pace was introduced, striking a pair of boundaries in Little’s sixth over, though the left-armer struck back in his next over, Williams bottom-edging an off-cutter onto his stumps.

That dismissal brought Sikandar Raza to the crease, and the all-rounder wrested another shift in momentum Zimbabwe’s way. Aided by brisk cameos from Madhevere and Luke Jongwe, his 38-ball half-century helped Zimbabwe take 76 runs from the last seven overs, lifting the total to 266-7. It would prove to be plenty.