Ireland's preparations for the upcoming T20 World Cup begin in earnest on Friday as they open their five-game series with Zimbabwe.

Clontarf Cricket Club on Dublin’s northside will be the venue for the opening two Twenty20 fixtures, before the series moves north to Bready Cricket Club in County Tyrone.

In fact, Ireland will play the African side eight times in 18 days as the T20 matches are followed up by a three-match ODI (One-Day International) series in Belfast from 8-13 September.

And while the results of the Zimbabwe encounters will affect the team's world ranking and go towards the qualification process for the ODI World Cup in 2023, Ireland’s main goal in this period is to fine-tune the squad that will travel to the UAE for the T20 World Cup in the autumn.

Graham Ford's side face the Netherlands, Sri Lanka, and Namibia in the group stage of the T20 World Cup, and Ireland will be hoping to secure a top-two finish, which would see them progress to the Super 12s stage of the tournament.

"The T20 World Cup is one of the biggest stages in our game and it will be watched by millions," said captain Andrew Balbirnie, speaking on 2fm’s Game On. "We have a lot of guys who have yet to experience that platform.

"You want to win a series of course, but qualification for the next phase of the World Cup is what is really important in T20 cricket for us as a team. 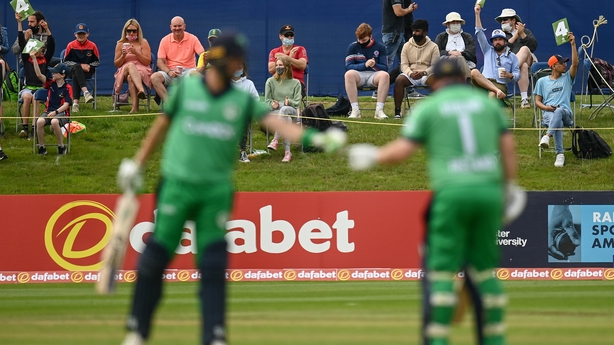 Balbirnie admits that the 2021 season has not gone completely according to plan, as there were disappointing results at the start of the year, and again in the early stages of the summer, however, a historic result and performance was produced in Malahide in July when Ireland beat South Africa.

And the captain is convinced that the victory over the world’s number five ranked side has instilled a true sense of belief into the squad, which will hopefully see them through to the World Cup Super 12s stage.

"We have had a mixed year, it didn’t start too well in the UAE against Afghanistan, and we struggled in Holland, but that win against South Africa showed again that when we do put things right and we do play some pretty good cricket, we can beat any team.

"That was the first time that there was a lot of belief in the squad, looking around the changing room.

"We beat England last year, but a lot of people were saying that it was a once-off, so to do it again against a top nation showed that the whole group contributed in the win and that we can compete against the best.

"So when you go to a World Cup and you are playing against the top teams regularly, that belief is as important, in my opinion, as the skillset itself."