Outstanding performances from Gaby Lewis and Leah Paul paved the way for Ireland to complete a 3-1 series win over Scotland at Stormont today.

Lewis registered her second score above 40 for the series. Driving through the off-side particularly impressed onlookers, but she unfortunately holed out on 49 looking to bring up her half-century in style with a six over deep square leg.

She finished the series top run-scorer with 116 runs at an average of 29 and a strike rate of 116.

Captain Laura Delany hit a 23-ball 27 to take Ireland to the brink of victory before she was trapped LBW, but Shauna Kavanagh powered the last two balls of the match to the boundary to complete a comprehensive six-wicket win.

Earlier in the day Scotland looked to bat with more intent. However, despite a brace of boundaries from Sarah Bryce and her opening partner Ellen Watson were soon back in the pavilion with Ava Canning and Orla Prendergast claiming a wicket apiece.

Katherine Bryce then launched a counter-attack, striking 22 from 21 balls - including two fours and a six - but was dismissed tickling a ball down legside off Paul.

This was the start of a big over that swung the match significantly to Ireland. Paul claimed three wickets in four balls in the 10th over, which included a spectacular diving catch by Lara Maritz at cover.

Not surprisingly she took out the player of the series award, despite numerous contenders

A further two wickets fell in the 13th over, which reduced Scotland to 57-7. However, an impressive 30* from 29 balls at the end by Megan McColl saw the visitors finish on 99-7 from their 20 overs.

The series victory will be a major boost heading into a year during which Ireland will play in two separate World Cup qualifying tournaments. 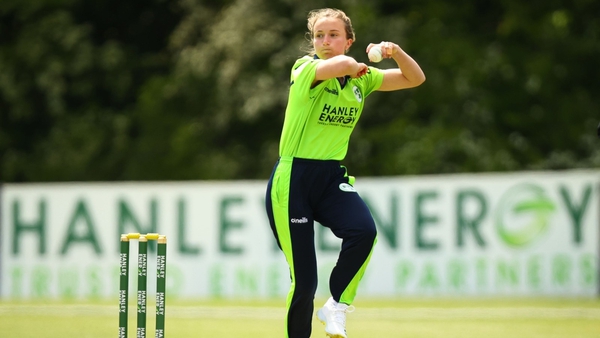