Andrew Balbirnie believes a run of T20 games could herald the start of a new era in Irish cricket after helping his side to a four-wicket victory over Scotland in the Tri-Nations Series.

Scotland captain Kyle Coetzer won the toss and chose to bat first, but they failed to match their performance in victory over the Netherlands on Monday as they finished on 193-7 from their 20 overs, with Calum MacLeod top-scoring with 72 from 42 balls.

Ireland, who handed debuts to 19-year old batter Harry Tector and 21-year old speedster David Delany, topped that total with 14 balls in reserve, thanks to half-centuries from Gareth Delany (52 off 28) and Andrew Balbirnie (64 off 32).

"They beat us in March and, looking at the scores yesterday, they had a lot of guys in nets. So to be able to restrict them to about 190 on that wicket, and it's obviously a high scoring ground, I think we did a really good job and our power play was brilliant."

The 28-year-old admitted that he had hoped for better than the half-century.

"It's the worst part of cricket when you are out and there are still runs to get," he added. "I should be out there getting them, but it’s always nice to contribute to a win."

The home side lead the table at the mid-way point and are back in action against Netherlands on Wednesday, hoping for better weather than last Sunday when their first match in the competition was rained off.

"It’s great to get a win, but we have to back it up. We have to dust ourselves down and they have some great cricketers.

"There will be a backlash from them and we have to be ready."

Balbirnie paid tribute to captain Gary Wilson saying "he backs everyone in their position" and believes that the future is looking bright for Ireland.

"There are a lot of good guys on the verge of getting involved in the squad," he said. "We have a good block of T20 cricket, so we can find areas where we are strong and find out the game we want to play.

"It’s the start of a new era in T20. We haven’t been playing great in recent years, but it’s a good start to it." 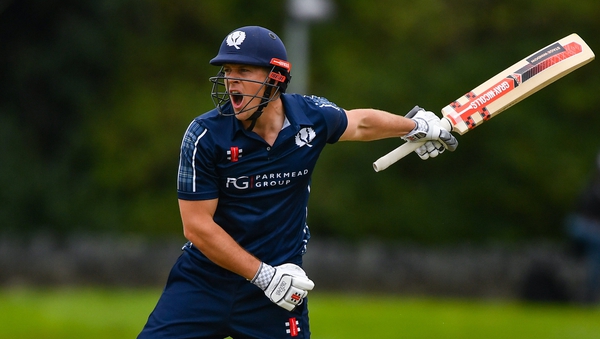 Munsey-inspired Scots down the Dutch at Malahide Cricket