Ireland's first ever Test match against England began in stunning fashion as the visitors rolled the English top and middle order for less than 50 runs, and the home side were eventually all out for 85 at Lord's.

Mark Adair was selected for Ireland to make his Test debut, having impressed in the one-day game with England in May, while Boyd Rankin became the first man to play for and against England since Mansur Ali Khan, aka Nawab of Pataudi, in 1946.

But it was Tim Murtagh who was the star of the show, claiming a remarkable five wickets for 13 runs.

In repsonse, Ireland lead at tea after Andy Balbirnie's half century moved them to 127-2. The advantage is 42 runs.

Murtagh, bowling on his home Middlesex pitch, started the rout as he took the wicket of England one-day hero Jason Roy, who was making his Test debut.

Roy was caught by Stirling in the slip cordon, while Ireland debutant Adair followed up with his maiden Test wicket by trapping new batsman Joe Denley, leg before wicket.

England were shocked, sitting on such a low total of 36 for 2 as captain Joe Root came out to attempt to steady the ship, but what followed will send shockwaves around the cricketing world.

For the fledgling Test nation, Ireland, proceeded to take five wickets for the loss of just seven runs, as Rory Burns went for six as Murtagh claimed his second wicket, Gary Wilson making the catch behind the stumps.

And the captain soon followed as Root got trapped lbw for just two runs following more excellent and accurate bowling from Adair.

Jonny Bairstow never looked comfortable at the crease and the World Cup hero was out soon after for a duck as Murtagh claimed his third wicket, this time clean bowled. 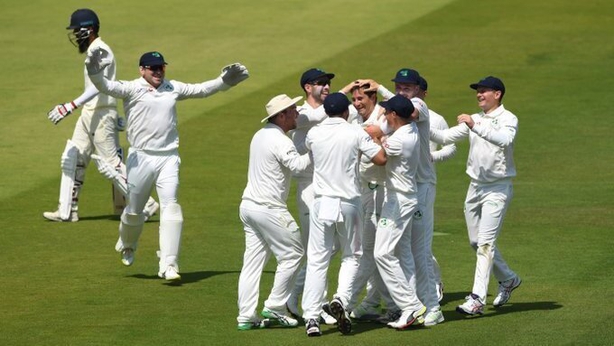 Suddenly the tail end were in play, long before the end of the opening session as England were facing a home humiliation, and the home side could only manage one more run before Moen Ali went for their third duck of the innings, with Murtagh becoming the first Irish cricketer to record a five-wicket innings. Ali caught behind by wicketkeeper Wilson.

Sam Curran was England's only bright spark in the morning session as he went after the change of bowler with Stuart Thompson getting hit around the ground in his first over.

But Ireland struck again as Stuart Broad was done by the other new bowler as Boyd Rankin secured his first Irish Test wicket, another caught behind by Broad.

A standing ovation around Lord's for @tjmurtagh following an outstanding spell of bowling this morning!#BackingGreen ☘️ pic.twitter.com/Vm2nwcniZa

Curran would finally fall for a solid 18, when compared with his team-mates - Denly's 23 the only other to get to double figures at that stage - as Rankin took his second wicket thanks to a fine close-in catch by James McCollum.

Ireland were now just one wicket away from finishing England's innings inside one session as Jack Leach and Olly Stone attemped to get to lunch unscathed.

But the lunch would come early as Adair claimed his third wicket, bowling Stone for 19 runs as England collapsed to 85 all out, as a shocked Lord's crowd try to process what they had just witnessed.

Now there's a happy face! My grandmother is 100 this week, she’s a big Cricket fan and we have brought her to Lords to see the first ever Ireland/England Test. And what a start by ⁦⁦@Irelandcricket⁩ . pic.twitter.com/LcdIsAsOLJ

"I'm not quite sure what's happened the last two hours to be honest," Murtagh told Sky Sports.

"It's just a dream to perform like that and to have my name up there on the honours board.

"I should know how to bowl on this ground, that was key, to get it up there and let the pitch do a little bit of work."