By John Kenny at Malahide

Set a big total of 328 for victory, the West Indies reached their target - their record ODI run chase - for the loss of five wickets with 13 balls to spare after an entertaining One Day International (ODI) at the sundrenched north Dublin venue.

Ireland will be disappointed not to have won this game having set a decent target, but on a pitch ideal for batting, the West Indies eased to their target, helped by a maiden century from opener Sunil Ambris who made a man of the match 148 runs.

Earlier in the day, Ireland captain William Porterfield had won the toss and perhaps surprisingly on a damp pitch decided to bat, with Ireland making two changes from the opening day loss to the Windies, bringing in James McCollum for Lorcan Tucker and replacing Barry McCarthy with Boyd Rankin.

Porterfield was dropped down the order with McCollum opening alongside Paul Stirling with the captain down at an unfamiliar number four.

However, McCollum, who had scored a century against Bangladesh in a recent A international, only made 5 before he was caught behind by Shai Hope off the bowling of Sheldon Cottrell with the score on 19. 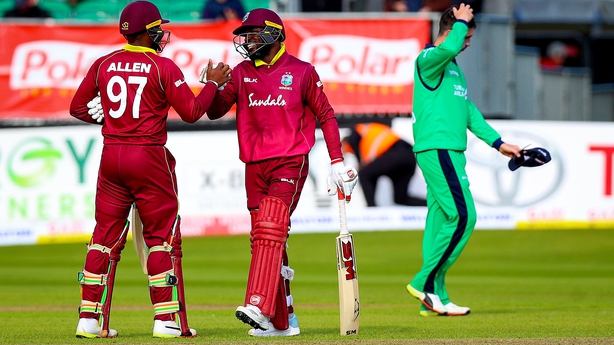 Stirling, who was dropped on 10, was joined by Andrew Balbirnie after McCollum’s dismissal, and the pair took Ireland to 165 by the 32nd over before Stirling perished on 77 as his hook shot from the bowling of Sheldon Gabriel was well caught on the fine leg boundary by Shannon Gabriel.

Porterfield’s poor recent form continued when he was caught at slip for Gabriel’s second wicket for just three in the 34th over with Ireland at that point on 173 for 3.

Balbirnie, however, continued on making his fourth century for Ireland reaching his ton at pretty much a run a ball, in the end making 135 to take Ireland close to 300.

That milestone was reached and surpassed by some late hitting by Kevin O’Brien who made 63 off 40 deliveries and Mark Adair who hit 25 off 13 as Ireland reached 327 for 5 off their 50 overs,

It was Ireland's highest ever total against the West Indies

In reply the West Indian openers Shai Hope and Sunil Ambris raced along to 84 for the opening partnership as the visitors piled on the runs, before Josh McCollum took an outstanding catch at backward point to get rid of Hope for 30 off Boyd Rankin’s bowling.

That stymied the run chase and Darren Bravo went shortly afterwards for 17 with the score on 112 for 2 in the 20th over.

However centurion Ambris and Roston Chase who made 46 put together a 100 partnership and in the end Jonathan Carter (43 not out) and captain Jason Holder (36) helped to take the West Indies past the Irish total.

The next game of the series is the West Indies against Bangladesh also in Malahide on Monday.