Afghanistan defeated Ireland by five wickets in the first T20I in Dehradun in a thrilling match defined by two record-breaking mid-to-lower-order recoveries.

In the first innings, an undefeated 67-run seventh-wicket stand between George Dockrell and Stuart Poynter propelled Ireland to 132-6 against a mighty spin arsenal led by the world’s highest-ranked T20I bowler, Rashid Khan, who tucked into two wickets in his first over.

But it was the experienced all-rounder Mohammad Nabi who was the standout performer; after conceding just 16 runs from his four overs in the first innings, the 34-year-old hit an unbeaten 40-ball 49 and combined brilliantly with Najibullah Zadran to break Irish hearts – and Afghanistan’s record for the highest sixth-wicket partnership – in the second.

The visitors won the toss and elected to bat, as Afghanistan managed to tame a powerful opening partnership in Kevin O'Brien and skipper Paul Stirling – Ireland’s two highest run-scorers in their recent triumphant series against the Netherlands – with just 11 runs conceded from the first three overs.

The innings soon had lift-off when Stirling bludgeoned a few commanding drives to double Ireland’s score in the fourth.

Teenage sensation Mujeeb Ur Rahman removed O’Brien, who holed out to Nabi at long-on, before Karim Janat trapped Andrew Balbirnie leg before wicket.

Nabi claimed the big scalp of Stirling (23), with Najibullah Zadran clinging on at deep-midwicket, as Ireland fell to 39-3. Simi Singh was soon stumped, with the economical Nabi (2-16 from four overs) claiming his second.

The enterprising Stuart Thompson twice found the off-side boundary, but Afghanistan still had an ace up their sleeve in the world-class Rashid, who removed Thompson (18) and Shane Getkate in his first over to make it 65-6. 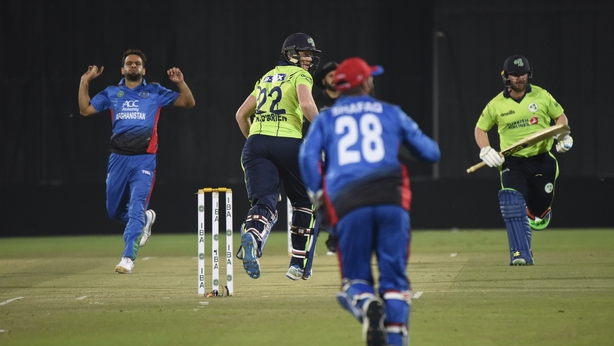 All-rounder Dockrell (34* from 28 balls) and keeper-batsman Poynter (31* from 28) carried Ireland to a respectable 132-6, with Afghanistan’s twirlers Mujeeb, Rashid and Nabi – who picked up 14 wickets between them in Dehradun in Afghanistan’s last series against Bangladesh – keeping a lid on the scoring rate.

Dockrell helped himself to a career-best score during Ireland’s record seventh-wicket stand, also their best for the fifth wicket or lower.

Afghanistan made a lively start to their innings, with 16 runs scored off the first over, including a six from Hazratullah Zazai, whose top-edged pull just evaded the fielder at deep square-leg.

Ireland were boosted when Asghar Afghan picked out Getkate off the bowling of Peter Chase, whose nine-ball over proved fruitful for the visitors, comprising just four runs and one wicket.

Despite spilling a catch, Rankin made amends with the wickets of Zazai and Janat. After that first-over blitz, Ireland had replied with three wickets for 14 runs off the next three. At 30-3, it was very much game on.

The experienced hands off O’Brien claimed a low-catch to dismiss Samiullah Shinwari off the bowling of Josh Little. Bowler then turned ‘grabber’ when Little took a tidy catch at third man to remove Sharafuddin Ashraf, and, at 50-5, two balls into the eighth over, Ireland were seemingly in the box seat.

At the 10-over mark, Afghanistan’s target rate had crept over seven. Simi Singh offered the first glimpse of Irish spin when he had to complete Thompson’s over, who limped off with a hamstring injury.

No boundaries were recorded between the fifth and 13th over, but when Ireland finally brought on a spinner to start an over, in Dockrell, Najibullah Zadran rocked back and cut for four before Nabi’s powerful pull in the 14th.

Some quick running stole eight off the 15th over – Afghanistan's best since the fifth of the innings – but it was the 16th when the tide started to turn, with a four and six from Zadran (40 from 36). The rate dipped under a run a ball, and Ireland desperately needed a wicket.

With nine runs required off the final two overs, the task became a tall one for Ireland, who slipped to their eighth successive defeat against Afghanistan in T20Is.