A brilliant diving outfield catch and an equally brilliant run out in the last three overs weren’t quite enough for Ireland, as Bangladesh Women won a tense last-ball victory in the first of their T20 encounters at the YMCA Sports Club on Thursday.

The first ball of the Ireland innings set the tone for a much improved Irish batting display as Clare Shillington struck a boundary through square leg. Despite losing the two openers – Shillington and Cecelia Joyce – early, the Irish middle order committed to the task and put together a positive batting display.

Gaby Lewis was an early aggressor, striking 28 runs from 16 balls (5 x fours; 1 x six) which included a massive six and a number of powerful well-timed boundaries.

Lewis was supported by captain Laura Delany (22 runs from 22 balls), before Isobel Joyce entered the fray and built an anchor innings, ending with 41 runs off 41 balls. Kim Garth played a cameo innings of 20 runs from 19 balls, and the Irish side finished with a competitive total of 134-8 from its 20 overs. 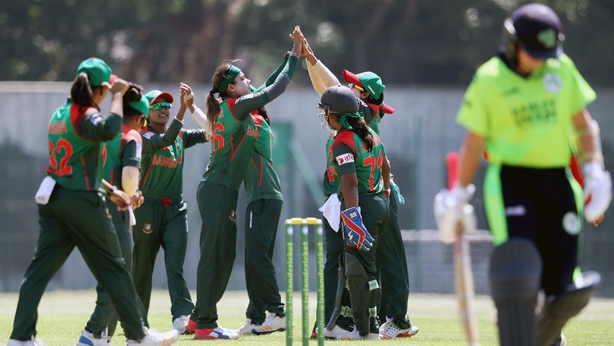 Bangladesh’s response had a rocky start losing opener Shamima Sultana in the second over for four. Several stabilising partnerships followed, built around the powerful batting of Nigar Sultana (46 runs off 41 balls; 6 x fours). A special piece of cricket was needed to stop Sultana, and it was duly delivered through a fantastic low-down diving outfield catch by Kim Garth.

With three overs remaining Bangladesh required 27 runs to win, but the visitors took 23 runs off overs 18 and 19 to put themselves in the box seat.

Eimear Richardson stepped up to bowl a tense final over. Three runs came from the first four balls, then on the second last ball a desperate single was chanced by batter Sanjida Islam but a spectacular pick up and throw from Cecelia Joyce at cover hit the stumps directly and ran Islam out.

Bangladesh claimed the tight victory with a scrambled run from the last ball, and with it set up an exciting series ahead. The next match will be tomorrow at Malahide, while the concluding third match at Pembroke Cricket Club on Sunday.