Ireland's Cricket World Cup dreams were shattered when they lost by five wickets to Afghanistan, led by former Ireland coach Phil Simmons, in the penultimate game of the qualifiers in Zimbabwe.

With the International Cricket Council (ICC) making the highly controversial decision to reduce next year's finals from 14 to 10 teams, full members Ireland, West Indies, Afghanistan and Zimbabwe were forced to take the qualifier route.

While Afghanistan and the West Indies will now be in with the eight automatically qualified teams in the finals next year, Ireland miss out, despite having thrilled the game with their exploits in the last three World Cups.

Afghanistan, who entered the Super Six second phase of the competition with no points, won all three of their games in that stage to join the West Indies at the finals in England next year.

Ireland won the toss and captain William Porterfield backed his side by deciding to bat on a cloudy morning in Harare but it was the Afghanistan bowlers that were on top throughout as Ireland made just 209 for 7 off their 50 overs.

Ireland had a decent platform at 112 for 2, but a moment of madness between Niall O’Brien and Paul Stirling saw the opening batsman sent back when a run was never on. Stirling was run out for 55 to put a brake on the Irish innings.

Kevin O’Brien chipped in with 41 on the slow track at the Harare Sports Club to at least get Ireland past the 200 mark but, despite Niall O’Brien’s assertions that the small total was defendable, 209 was never likely to be enough. 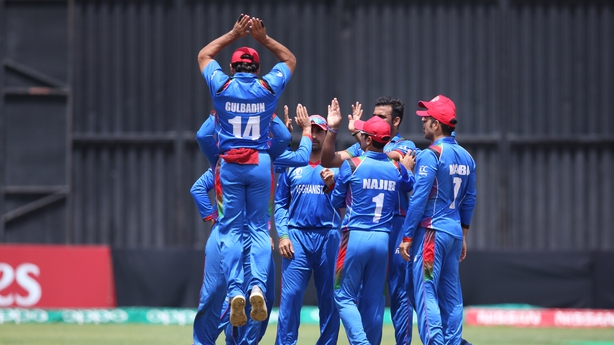 Afghanistan plundered the Irish attack early. Their opener Mohammad Shahzad scored 54 off 50 balls to take the Afghans to 86 before he was caught by Boyd Rankin off the bowling of Simi Singh in the 17th over.

Gulbadin Naib made a watchful 45 off 91 balls before he was out to Rankin and the Afghan run rate slowed when Rahmat Shah went for 12 to Singh in the 29th over with Ireland perhaps scenting an unlikely victory.

Mohammad Nabi went for 12 and that was Singh’s third wicket in the 38th over as Afghanistan wobbled.

However the 45th over, bowled by Barry McCarthy, yielded 15 runs and a wicket, which blew Ireland's chances.

Afghan captain Asghar Stanikzai, who had his appendix removed just before the qualifiers, took his side to victory with an unbeaten 39 off 29 deliveries.

Ireland must lick their wounds now and concentrate on their historic first Test match against Pakistan - at Malahide in May - but the fact that they wont be at the 2019 one-day finals will be a hard one to swallow.