Ed Joyce scored an unbeaten century to get new Ireland coach Graham Ford’s reign off to a successful start with a four-wicket win over the UAE in Dubai.

The Dubliner shared a vital sixth wicket stand of 131 with Gary Wilson as the pair rescued the Boys in Green from a precarious 91 for 5 as they chased the hosts’ total of 222 for 9.

Joyce missed last month’s series win against Afghanistan with a knee injury, but showed no ill effects in scoring his sixth ODI century, and his tenth overall for Ireland.

Joyce finished undefeated 116 from 149 balls, hitting the last of his 13 fours to seal victory with four balls to spare, and also cleared the ropes once in a batting master-class.

Gary Wilson proved the perfect foil for Joyce, exhibiting all his nous and experience in a vital 53, his 12th ODI half-century and his 29th in all formats for the Irish.

It was a shame the pair couldn’t be together at the end, Wilson falling to Ahmed Raza (2-29) with the scores level.

Mohammad Naveed (2-45) had removed both Paul Stirling and Andy Balbirnie without scoring, and despite a breezy 28 from skipper William Porterfield, Ireland were in real trouble. That trouble became a crisis with the O’Brien’s going cheaply and it took a record one-day partnership against the Emiratis to deny them a famous win.

Earlier in the day the Irish attack turned in a steady display with four of the five bowlers used taking a brace of wickets.

The pair took the hosts to 175 for 4 with over seven overs to go, but the Irish applied the brakes successfully, which was to prove crucial in the final analysis.

Joyce was delighted his innings secured the win which keeps the Irish momentum going as they build towards the World Cup Qualifiers in March.

"It's difficult to come out of our winter straight away and hit our straps having been indoors, but it's great to get the win and back up the series victory over Afghanistan and keep that winning streak going," said Joyce.

"I didn't realize I'd passed 10,000 List-A runs but I've been playing a long time. It felt great to get the hundred. I didn't feel in great nick going into the game but felt in physically good shape and that hasn't been the case for a while. That made the difference today, with Gary and myself ensuring we got over the line with a very mature partnership.

"We had a few soft dismissals but you'll get that with the players being a little rusty. We'll tighten up the batting and the first ten overs with the ball and improve in the games ahead."

The teams meet again on Saturday at the same venue. 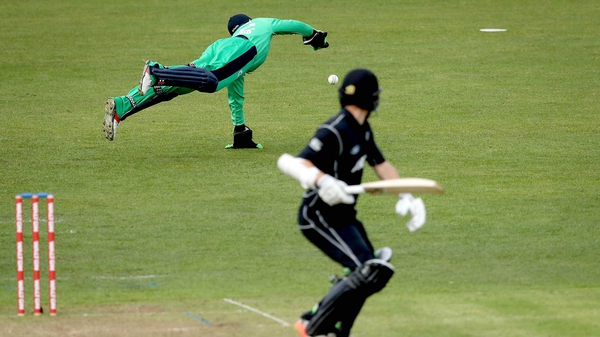 India set to travel to Dublin for T20 internationals