England eased their way to a seven-wicket victory over Ireland in the first of the One Day Internationals at the County Ground in Bristol, winning with 30 overs to spare.

It was a chastening experience for Ireland and they will have to raise their game to avoid another humiliating defeat in their second and final ODI against England at Lord's, the home of cricket, on Sunday.

After a bright start when openers Ed Joyce and Paul Stirling had battered the English bowling attack, reaching 40 in only the sixth over, Ireland fell away to 127 all out in the 33rd over.

England bowler Adil Rashid claimed the man of the match award after taking five wickets for 27 runs, the second best haul by an English spinner in ODIs.

Earlier in the day, Irish captain William Porterfield won the toss and decided to bat on a windy morning, aiming to set England, captained by Dubliner Eoin Morgan, a target.

Joyce and Stirling set off at pace against English opening bowlers David Willey and Mark Wood with the latter playing some bludgeoning shots in between misses as the watching Irish supporters looked on through splayed fingers. 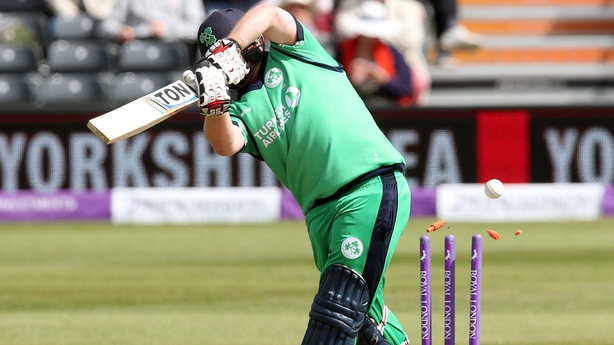 Stirling was bowled by Wood for 20 in the sixth over and was quickly followed by Joyce LBW to Willey in the seventh over for 23.

Andrew Balbirnie and Porterfield had to rebuild the Irish innings and the run-rate fell away before Balbirnie was caught by English wicketkeeper Sam Billings for 30 in the 18th over.

Porterfield crawled his way to 13 off 45 balls before he fell in the 22nd over with the score on 90 and Ireland's innings began to slide away.

Gary Wilson and Kevin O’Brien went LBW for 1 and 4 respectively before Stuart Thompson was bowled for 4 in the 27th over, followed George Dockrell for a duck.

Tim Murtagh was the final wicket to go, for 11, and Ireland were all out for 126. 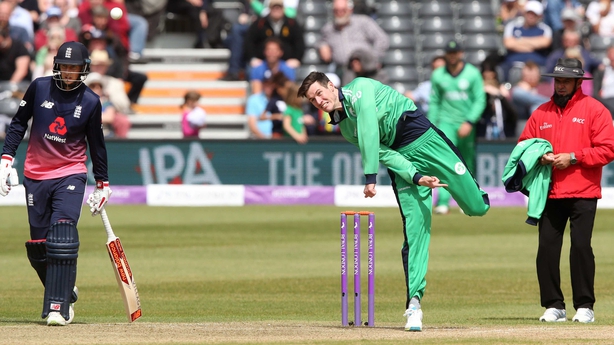 Ireland had early success in England's reply, getting the wicket of Jason Roy in Peter Chase’s first over, but Alex Hayles was dropped twice before he was out for 55 in the 11th over - again off the bowling of Chase.

Chase did have the conciliation of getting Morgan, the former Irish international out for 10, caught in the deep for his third wicket.

Johnny Bairstow joined Joe Root in the middle and the pair took England over the line, reaching 127 in the 20th over, Root 49 not out with Bairstow hitting the winning runs on 10 not out