Dubliner Eoin Morgan will return as captain for England's next one-day assignment in India despite missing the series victory over Bangladesh.

Morgan and opening batsman Alex Hales pulled out of the Bangladesh tour due to security fears, so Jos Buttler [below] took charge for the three-match series which England won 2-1 after seeing off the hosts by four wickets in the decider in Chittagong.

England and Wales Cricket Board director Andrew Strauss said the decisions of Morgan and Hales allowed other players to stake a claim for their spots, but assistant coach Paul Farbrace revealed both will retain their positions.

He said on Sky Sports News HQ: "There are a lot of good friends in this team which makes it easier for Morgs and Hales to come back in the side - and they will come back in in January. Morgs will be captain in India." 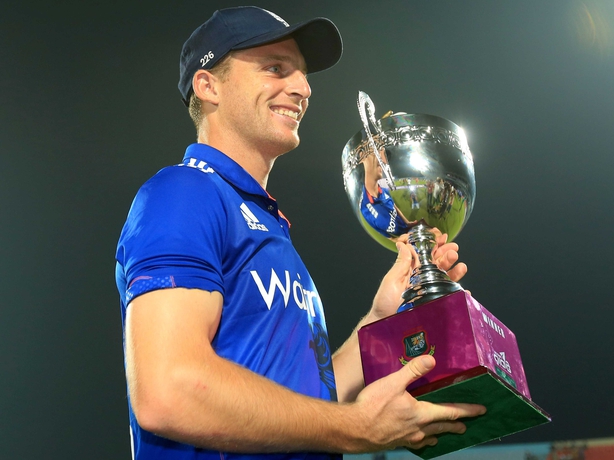 Farbrace said before the series he was "massively disappointed" with the pair opting out, but he thinks Morgan's presence was still felt in his absence.

Farbrace said: "Of course you might be disappointed that people are not available, whether that's through injury or loss of form, or whatever it might be, you're always disappointed.

"But Morgs has very much been the driver behind this team moving forward.

"In a way, what he's set up in his legacy has carried on into this group. Jos has taken over as captain in his own way but the group around him know what's expected of them.

"When you play for England it's about winning. It's not about 'we played really nicely but we lost', if we lost the game last night, any good word would be undermined by the fact that we didn't win the series."

England's focus now switches to Tests, with seven scheduled to be played before Christmas. The first gets under way on October 20 in Chittagong and they will play another against Bangladesh in Dhaka before a five-match series in India.

Farbrace, who flies home on Thursday to have some time off before the India series, added: "For the Test players to play seven Test matches on the bounce is going to be really physically and mentally tough for them."