A delayed start saw the game reduced to 47 overs a side but a magnificent knock from the 27-year-old made the sizeable crowd forget the murky conditions.

The left-hander was showed immaculate touch as he hit 16 fours and 9 sixes in his 152 from just 86 balls - being particularly savage on any error in length or line from the Irish attack.

Sharjeel shared a 90-run stand with Mohammad Hafeez (37) and another of 96 with Babar Azam (29) as Pakistan racked up the runs, but even after the opener had gone one of four victims for Barry McCarthy, the onslaught continued.

Barry McCarty (4-62) continued his excellent start to his Ireland career, while Tim Murtagh (1-38 from 10) escaped the carnage.

Chasing a mammoth 338 to win it was in reality only ever going to be about respectability for John Bracewell’s charges. However ,Imad Wasim and Umar Gul saw to it that they didn’t even get that.

Once Mohammad Amir bowled Paul Stirling with a beauty of an inswinger off just the second ball of the innings, Irish supporters were probably left fearing the worst.

William Porterfield (13) and Ed Joyce (9) managed to batten down the hatches for a few overs before Gul (3-23) did for both of them and added the wicket of Kevin O’Brien second ball for four shortly after, just for good measure.

From there on it was all about Imad Wasim - the left arm spinner actually played in Ireland last season with Instonians - and he ran through the lower order to finish the game in double-quick time.

What little resistance there was came from Gary Wilson (21) and Andy McBrine (14*) before Imad (5-14) claimed the final three wickets in the space of just four deliveries as the hosts were skittled for 82.

The teams meet again at the same venue on Saturday (10:45am) in the second game of the series where Porterfield’s men will be desperate for the chance to repair the damage.

At Malahide, 1st ODI, Ireland lost to Pakistan by 255 runs 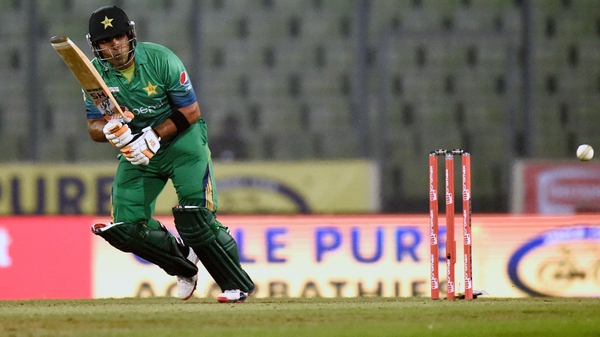 Pakistan to play in World T20 after 'pukka' security assurances